Public Works Department Staff oversee excavation work at Spring Hill ahead of construction of a 500,000 water storage reservoir. It will be one of four new reservoirs to be constructed under the Caribbean Development Bank funded Water Enhancement Project on Nevis
NIA CHARLESTOWN NEVIS (JULY 16, 2012) — Yes there will be disruptions in traffic and possibly the water supply; therefore the public will be called upon to exercise patience. That advance notice came from Project Manager of the EC$30million Nevis Water Enhancement Project Mr. George Morris. Preparatory work for the multimillion dollar project funded by the Caribbean Development Bank began on July 6th, 2012.

In an interview with the Department of Information on July 9th, Mr. Morris explained that as the project progressed, some areas would be affected.

“We feel that we can do almost everything in the verge. We will try our best to stick to that and don’t damage most of the road itself,” he said.

Advanced work on the project which will conclude in 2013, commenced on July 6th at Spring Hill with land preparatory work for a 500,000gallon reservoir which will be constructed in November 2012. 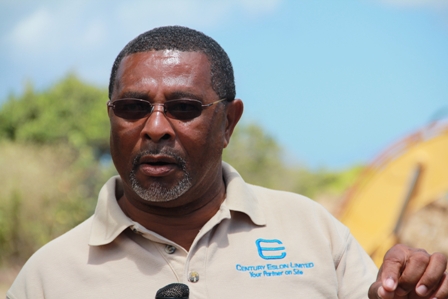 The reservoirs will be built at Spring Hill, Camps, Maddens, Fothergills, Stoney Hill and Morgan Estate while the pumping stations will also be constructed at Camps and Fothergills.

Notwithstanding, the Project Manager noted that although he was unable to predict whether there would be disruptions with the water supply he said the possibility existed.

“One of the things that is going to happen is, during construction the existing system has to stay intact till the new areas are completed. We are going to be very careful in the way that we dig and try to avoid any disruption to the system but in the event of disruption, our team from the Water Department would be on hand to do the repairs as quickly as possible.

“We are going to ask the general public to bear with us and work along with us in the event that things happen. I know in some areas it will be tight because we do have the existing system already and we will have to be careful digging around. Digging with excavators you can’t really say that we are not going to hit anything but we are going to have a stock of repair materials on hand and the Water Department is going to be ready to move in, if there are any likely damages,” he said.

Preparatory works moved to the Maddens site on Monday July 16, 2012.. 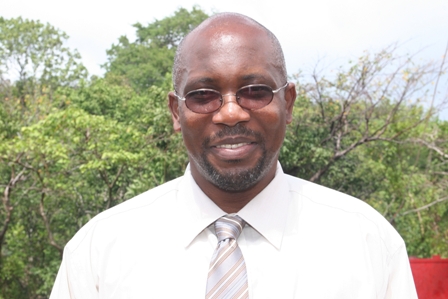 “The Administration wanted to make the water supply on Nevis more reliable than it is, in that, our goal is not just to provide water 24 hours a day but also to have surplus storage. That way, in the event we have any technical difficulties we should still be able to keep our customers supplied [with water],” he said.

At the end of the project, storage would be provided for an additional 2.2 million gallons of water; the Water Department would be capable of moving greater volumes of water around the island; transmission lines would be upgraded for greater capacity and the pumping stations would be equipped with more powerful pumps.