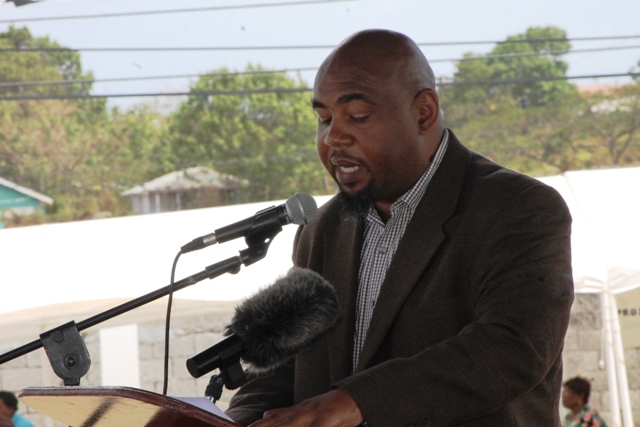 Mr. Huey Sargeant, Acting Permanent Secretary in the Ministry of Agriculture on Nevis delivering remarks at the 24th Annual Agriculture Open Day Opening Ceremony on March 22, 2018 at the Villa Grounds in Charlestown

NIA CHARLESTOWN NEVIS (March 23, 2018) – Mr. Huey Sargeant, Permanent Secretary in the Ministry of Agriculture says farmers are important to the food security thrust on Nevis and should be honoured for their contributions.

Mr. Sargeant made the comment when he delivered opening remarks at the Opening Ceremony of the Department of Agriculture’s 24th Annual Open Day at the Villa Grounds in Charlestown on March 22, 2018. The two-day event was held under the patronage of Mr. Eugene Maynard with the theme “Building Resilience to Climate Change for Food Security”.

“The idea of food security is not just a cliché or fancy term we like to use. Food security and climate change are not apps on your mobile phone and their importance to the community should not be devalued.

“Our food security thrust is a vital component of national security and I regard our farmers as the soldiers on the front lines. Therefore, they need to be recognised and celebrated and encouraged as they are the ones that keep us from going hungry. They need to be able to stand shoulder to shoulder with any other profession and sometimes in front of others,” he said.

Mr. Sargeant stated that one of the basic requirements of any country is the ability to feed itself. In the case of Nevis, 23 years of combined efforts of the Ministry of Agriculture and primary producers in every sector of agriculture and fisheries has resulted in tangible evidence of what can be produced on the island.

During the ceremony, a number of farmers were honoured for their outstanding performances in 2017. Mr. McLevon Tross was named as the top Crop Farmer for 2017. Mr. Donald Daniel was awarded for having the Most Throughput at the Marketing Division for 2017. The top Livestock farmer for 2017 was Mr. Wilroy Gerald. The Most Thoroughput at the Abattoir for 2017 was awarded to Mr. Oretius Jones and the top Fisher title for 2017 went to the Indian Castle Fisher Folk Association.

Mr. Sargeant used the opportunity to thank the allied agencies and partners for their assistance following the passage of two major hurricanes in the region in 2017.

He said the invaluable assistance led to the launch of a project dubbed “20K” in October which entailed the distribution of 20,000 seedlings every month for four months.

The Agriculture official used the opportunity to encourage the public to support the agriculture sector which contributes to the island’s economy and provides food that is safe for consumption.

“We have to eat and to eat it’s either you pay for your food at the supermarket or restaurant or you grow it.

“At the Ministry, we prefer that our food is grown locally as it is safer, tastes better, more nutritious and most of all if it’s grown here the money stays here,” he said.