President of the Nevis Blind, Light and Visually Impaired Society Ms. Jenipha Freeman expressing gratitude to the Royal Bank of Trinidad and Tobago for its donation

NIA-CHARLESTOWN (December 22ND, 2010) — Nevis’ financial institutions have begun to spread the Christmas cheer to a number of individuals and organisations, particularly to those considered “less fortunate.”

The Nevis Blind, Light and Visually Impaired Society is on the receiving end this year as the organisation, within one week, received food and toiletries courtesy of the Royal Bank of Trinidad and Tobago [RBTT] and a monetary donation from the Bank of Nevis [BON] Limited.

Mrs. Charles-Sutton expressed delight in knowing that despite the economic challenges that many institutions face worldwide, RBTT was able to assist the Nevis Blind, Light and Visually Impaired Society as well as other organisations based in the twin island federation.

“This is a very proud moment for RBTT Bank and also for its management and staff,” she said just moments before singing Christmas carols to those in attendance. 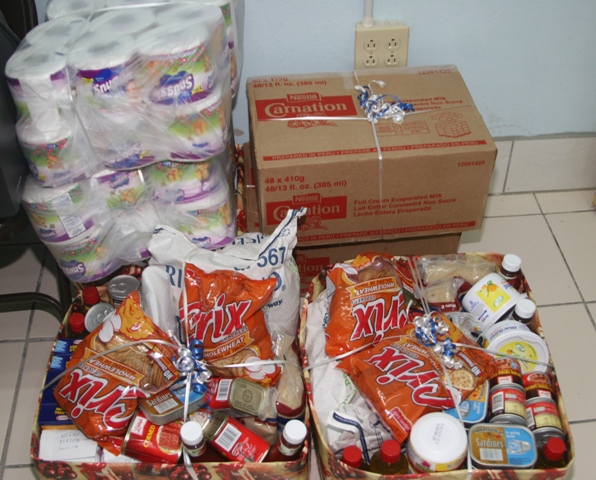 Items donated by the Royal Bank of Trinidad and Tobago [RBTT]

In her response, President Freeman said she was “very grateful” for the bank’s donation, which would be added to other items that the society will present to the blind and visually impaired residents of Nevis.

“As a blind society, we don’t just say we’ll give to persons who are visually impaired but to persons in the community with disabilities or as the need arise and so we are very grateful and we hope that the RBTT Bank would continue being on board with us in whatever way.

“On behalf of the entire society and persons who will partake from it, I want to say a very big thank you,” Ms. Freeman said.

The donation was made at the Blind School in Ramsbury in the presence of Mrs. Tamicia Lestrade and her group of three to 12 year olds from Spiritual Hands Ministries and Services [SHMAS] who are using the venue for their Christmas meetings. 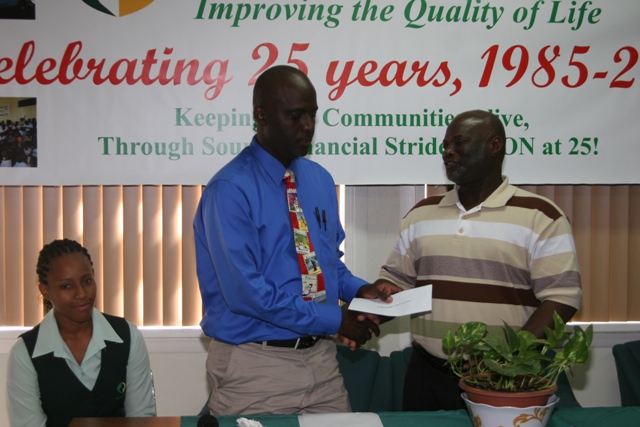 According to Mr. Lake, the cheque reflected the proceeds gained from the bank’s anniversary charity walk last month as part of its 25th anniversary celebrations.

“When this idea came about, the participation of the Bank of Nevis partnering with the Nevis Blind Light Society in terms of having a walk-a-thon we were very excited about this event and unanimously everyone was on board in terms of partnering and making this special presentation,” he said.

In addition to expressing her society’s gratitude to the bank, President Freeman reminded those present of the impact blindness could have on their lives.

“Blindness: it can happen to anybody and blindness is something that tells us, who can see still, that we need to preserve our sight and so even though one can be blind as I am, that doesn’t prevent us from leading our normal lives and so persons out there in the public who are sighted we would always need them and we are very grateful to them,” she said.

The Nevis Blind, Light and Visually Impaired Society, has since 1998, been involved in a Christmas drive where its members present food and money to a number of residents. The society’s activities are based on its motto “equality despite disability”.