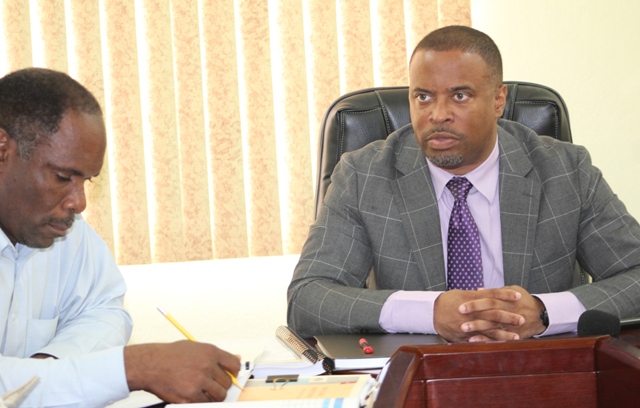 NIA CHARLESTOWN NEVIS (January 09, 2018) — The Cabinet of the new Nevis Island Administration (NIA), headed by Hon. Mark Brantley, Premier of Nevis and Minister of Finance, commenced its first Budget Estimates meeting with members of the Ministry of Finance, on January 09, 2018, at the ministry’s conference room.

In brief remarks ahead of the three-day meeting, Mr. Brantley gave some insight into the annual forum’s process and urged the public to understand how it works.

“The public should understand that the process is one of give-and-take. I think the ministries and the ministers come, they want certain positions created, they want Capital projects done etc. and I think, the good people at Finance keep us all in check and let us know what is realistic and what is not so realistic,” he explained.

Mr. Brantley stated that this year, the process was delayed due to the recently concluded Nevis Island Assembly Elections.

However, he expressed hope that it would conclude in a timely manner, paving the way for budget session at the Nevis Island Assembly and a subsequent budget for 2018 which would set out the government’s expected revenue and expenditure.

Meantime, Mr. Brantley reminded the public that not everything they have committed to will happen in the first year in office. He said they have a five-year mandate and have to be sensible and conduct themselves in a prudent manner.

“The people have entrusted us with the management of the public purse and we have to do that in a fiscally prudent and sensible way.

“That is the way that we propose to approach this…in terms of plotting the way forward for the island for the next year,” he said.

The budget estimate meetings are usually held in camera with Cabinet members, the Ministry of Finance and Permanent Secretaries in the NIA.