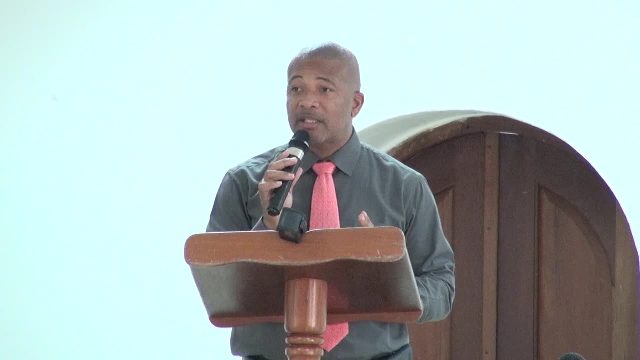 Hon. Spencer Brand, Minister of Labour, Public Works, Physical Planning, Posts and Environment in the Nevis Island Administration delivering remarks at a recent meeting at the St. Pauls Anglican Church Hall, with members of the Cabinet and Senior Civil Servants

The new Minister whose background stems from the private sector for more than 20 years, was at the time delivering remarks at a recent meeting of Cabinet with Senior Civil Servants. The forum was held at the St. Paul’s Anglican Church Hall.

“I am not saying that if a person is sick that they ought not to allow themselves to recuperate but I think that the idea here, is to try and discourage us from abusing the extended sick leave mechanism.

“I believe also that the frequent leave of absence is something that is also creating some headache for the government as persons might be also abusing that mechanism…I would hope that all of us can begin to appreciate that if you lose one of two days on the job it can have a knock-on effect so to speak on the job somewhere down the line,” he said.

The minister also told civil servants they should exercise honesty where the issue of sick leave is concerned. He said in cases where they are ill they should allow themselves to recuperate to be able to function optimally while discharging their duties but if they were not ill they should desist from the notion of frequent leave of absence.

Mr. Brand, acknowledged that he is transitioning into his new job in the NIA. He said it is a new experience and a new feeling to no longer be his own boss.

However, he pledged to do his best to live up to the expectation of the Cabinet and also to the people of Nevis.

Mr. Brand, who is the representative of the Parish of St. Pauls, was sworn into office on December 24, 2017, following the recent Nevis Island Assembly Elections on December 18, 2017.