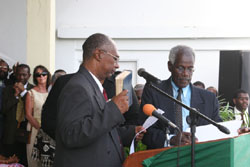 The Elquemedo Willett Park (formerly Grove Park) in Charlestown will be the venue for the keenly anticipated event. The ceremony will begin at 5pm sharp.

Prime Minister of St. Kitts-Nevis, the Hon. Dr. Denzil Douglas is also expected to be attending the event which is anticipated to be a glittering occasion.

Members of the general public are also invited to witness the swearing-in of the Cabinet of Ministers.