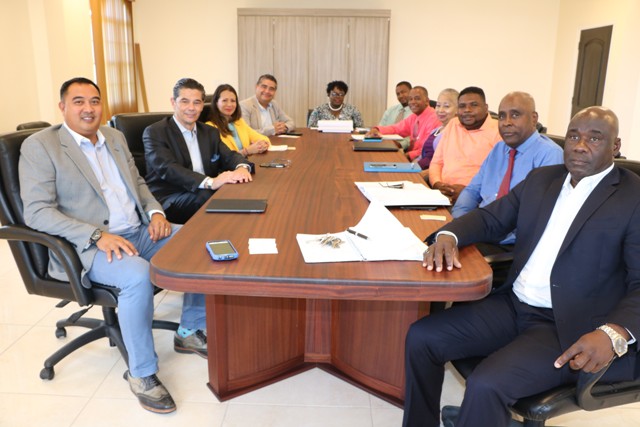 NIA CHARLESTOWN NEVIS (May 08, 2019) — A four-member delegation from the Four Seasons Resort, Nevis, met with the Cabinet of the Nevis Island Administration at Cabinet Room on May 08, 2019 to give an update on the resort’s impending four-month closure from June 01, 2019 for renovation work, and the implication for the more than 600 staff members employed there.

In comments ahead of the meeting, Mr. Gonzalo Güelman Ros, the resort’s General Manager noted that plans are on stream for the closure however, not all the staff will be affected.

“I would say about 250 or a few more colleagues will remain working full-time and about 400 will be not working during those four months, and they will be paid. They will not be terminated. That’s important to clarify, and they will be paid a certain percentage of their salary plus full benefits.

“They have the luxury to go and work with other companies or places or the construction company and if they do and they achieve a job with them if they have the skills, and they decide to do it, they will still get the salary we are offering of 25 percent, as suggested by the resort owners and the benefits,” he said.

Mr. Ros added that although the resort will be closed the Villa component will remain open. Certain amenities of the resort including the spa, golf course, tennis courts and fitness centre will also be available at the request of potential guests, rentals or villa owners.

The resort manager stated that the closure follows their decision to remain open for the first two phases of the renovation project.

“In certain ways the reputation of our property brand and Nevis was damaged because the feedback we received from the guests were really negative.

“So this year that Phase 3 of the renovation is going to be really intrusive and really relevant to the history and the legacy of this resort for the future. We decided and we agreed, based on months and months of hard work on how to do this the right way, to have a closure of the resort during four months…So this is to preserve the integrity of Four Seasons Nevis and our colleagues, and working family because once we are reopened we are sure we are going to elevate this resort to be the first resort in the Caribbean as it was 28 years ago,” he said.

Mr. Ros noted that the Resort remains committed to the people of Nevis and acknowledged its economic importance to the island since it opened its doors 28 years ago.

He said they regard the people and the colleagues who are working for the resort as family.

“Our Nevisian family. We are visitors on the island. We are totally clear that the Four Seasons Nevis belongs to Nevis. It has been here 28 years, and at this stage it’s crucial for us to elevate the experience,” he said.

Meantime, Hon. Alexis Jeffers, Deputy Premier of Nevis, thanked the resort’s executives for accepting the invitation to update Cabinet. He regarded the meeting as an important means of staying in touch.

“I do believe it is important for this meeting to take place and to continue on with the island’s business as we are making sure we are staying in touch with the resort and getting as much information to disseminate accordingly as there have been a lot of discussions on the island regarding the planned closure of the resort.

Hon. Mark Brantley, Premier of Nevis; and Hon. Spencer Brand are off island on official duty.