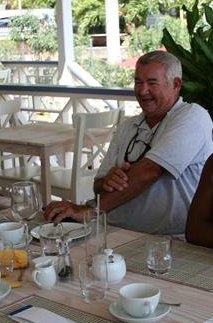 Speaking to the Nevis Department of Information Friday afternoon, Anslyn, himself a leader in the fishing industry for decades, said Gallows Bay will be a place for fishermen to market their products easier, without the stress of worrying about refrigeration or selling their day’s catch.

Anslyn, who served as Director of Fisheries during the former CCM-Administration, said that one of the stipulations of receiving the grant aid from Japan was that the Administration would have to supply the land.

“The Japanese experts visited Nevis and toured the island, and in their view also Gallows Bay is the most suitable location for the Complex”.

Anslyn contend the reasons for his conviction go beyond the obvious.

“The fact that Gallows Bay is subject to heavy erosion is important, as the people of Nevis will soon see the Bay up into the Bogs. Therefore we must look down the road to what the facility can do for the island, and all in all we will have to look positively to the future”.

The CCM party, now in opposition, has been vociferous in its opposition to the site, and to the project.

Hobson had earlier claimed that CCM in government was not part of any proposed Japanese-funded Fisheries Complex Project.

When pressed by the host, Hobson claimed that his contention had been that all the aid money given to the Federal Government by the Japanese was being spent in St. Kitts, citing the Basseterre and Old Road Fisheries Complexes, while none was being spent in Nevis. He didn’t say how or where any aid to Nevis was to be spent.

But former Premier, Amory, said that the Japanese-funded project was in fact part of the overall strategy for the Fisheries Department in Nevis during his CCM-led Administration. However, Mr. Amory said he was not convinced that Gallows Bay was the best location.

Anslyn confirmed that the Fisheries Project concept did in fact begin under the CCM administration.

The Project is scheduled to begin construction later this year at a cost of US$26 million.