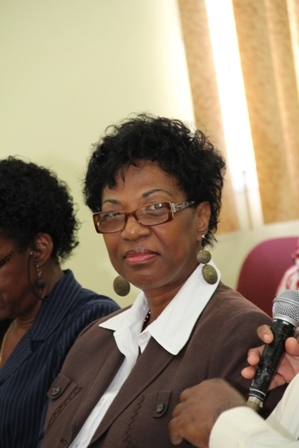 Permanent Secretary in the Premier’s Ministry, Nevis Island Administration Mrs. Joslyn Liburd at a recent press conference hosted by Deputy Governor General His. Honour Eustace John, to launch activities to commemorate Queen Elizabeth II’s Diamond Jubilee on Nevis
NIA-CHARLESTOWN NEVIS (February 22, 2012) — Members of the Nevis Island Administration (NIA) are expected to take part in the 60th anniversary celebrations of Queen Elizabeth II’s ascension to the throne and members of the Cabinet are slated to participate in the one day royal visit of the Earl and Duchess of Wessex to St. Kitts and Nevis when the couple arrives at Port Zante, on March 03, 2012 to mark the occasion.

Permanent Secretary in the Premier’s Ministry Mrs. Joslyn Liburd, made the disclosure on Thursday February 16, 2012, in response to a question at a press conference hosted by the Deputy Governor General His Honour Eustace John. He was at the time introducing the activities planned for Nevis to commemorate the Head of State’s 60th anniversary.

“I know for a fact that the Cabinet will be also invited to the Princes visit in St. Kitts and also yes at the Beating of the Retreat [in Nevi] and we would like to encourage them also to go on these walks that are being planned by the Ministry of Health,” she said.

The first major activity planned for Nevis commenced today Wednesday February 22nd and the first of 30 trees to be planted on the island was done on the Waterfront in Charlestown.

Five trees national trees (Flambouyant) will be planted, one each in the island’s five parishes while the remainder of the trees (citrus) will be planted in the various schools on Nevis.