CHARLESTOWN NEVIS (April 16, 2010) — Chief Executive Officer of West Indies Power Ltd. (WIP) Mr. Kerry McDonald assured Nevisians on Wednesday, that work was on track for the delivery of geothermal power by the first half of 2011. He said work continued behind the scenes despite what looked like non movement on the ground.

Mr. McDonald was at the time updating the status of the geothermal project in an interview with the Department of Information. Mr. Kerry had informed in an earlier press release, that financing for the US$43million project had been secured from Scotia Bank with a guarantee from the Export Import Bank of the United States.

“I know everybody feels that it has been a long time coming but in fact we are moving in the industry at what’s considered lightening speed in getting this. Come next year, in the first half of 2011, the island will be powered by geothermal power.

“If St. Kitts signs their agreements, there will be continuing employment for construction of the power plants necessary to supply St. Kitts also,” he said.

According to Mr. McDonald, equipment was being purchased for the geothermal power plants and a team was at the moment in the United States to evaluate the various drill rigs necessary for the next stage of drilling. Their recommendations were expected by the end of April.

He said based on the recommendation, down payments will be made on the drill rigs then they would be shipped to Nevis. Drilling is slated to commence in the latter part of June.

According to Mr. McDonald, drilling would include a test hole called an injection well at the base of Round Hill. Its purpose would be to test the site to ensure it was a suitable area that water from the geothermal power plant could be returned to the geothermal system, at a safe distance without cooling down the system.

“The re injection well that we are talking about will go down between 6,000-7,000 feet. It is made so that it is basically at the same level as the geothermal system that is feeding the solution. So it is again following the same fractures that already exist.

“We are not making any new fracture paths or anything else, not like what we call the EGS System where they have to go in and fracture which causes earthquakes. This is following the same fracture paths and that is why it is important that we do the test first to say yes, this is an area that will be able to take that water and send it back into the zone we want it to go back to,” he said.

The WIP Official explained that the engineering for the plant which was being carried out in California was near completion and the first draft of the Environmental Impact Assessment for the plant was expected by mid May. 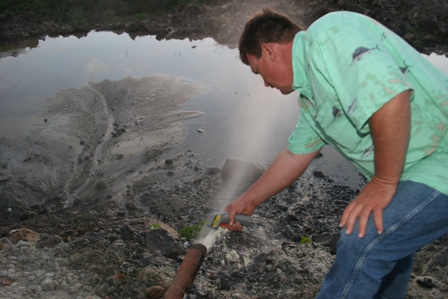 With regard to the promise of jobs for local workers, Mr. Kerry noted that screening was expected to take place in June just before drilling commenced.

“The first part of June is when we will start drilling. We will be looking for people to work on the drills at that time. The contractor who will be in charge of the construction will be on island and will be looking at the skills and the people that are here. We estimate that basically they will end up employing somewhere between 30 and 40 people from the island,” he said.

Other highly skilled labour, the CEO explained, would most likely be imported from outside the Caribbean, since that expertise was virtually non-existent in the region. However, the general contracting would come from Nevis.

Both the 10 megawatt power plant and the power plant planned for St. Kitts which WIP hoped would follow on quickly will all be located at Spring Hill, at the top of Westbury road.

Mr. McDonald explained that the earlier exploration holes that had been dug to obtain information on the resource and to conduct flow tests would eventually be plugged and abandoned. However, the experimental hole at Nevis 3 in Hamilton would be flowed a few more times before it too was abandoned.