In a recent interview with the Department of Information, the CEO whose company had been contracted to provide geothermal power to Nevis by the first half of 2011 said it was because of the Administration’s sustained interest why the people of Nevis were enlightened about geothermal power.

“Actually we had some people who weren’t from the island and they were asking about the geothermal systems and about the people what do they know and my statement was – most Nevisians know more about geothermal power than most people in the United States or anyplace else.

“They have really learned alot and know what it is and can talk knowledgable about it on the street. I think alot of that is due to the effort that the government has put into getting the word out on what is geothermal power? What is it going to mean to us? How is it done? I know they [NIA] have gone through all the schools giving out information and presentations. The people [visitors] were absolutely amazed about the amount of information that the average Nevisian knows about geothermal,” he said. 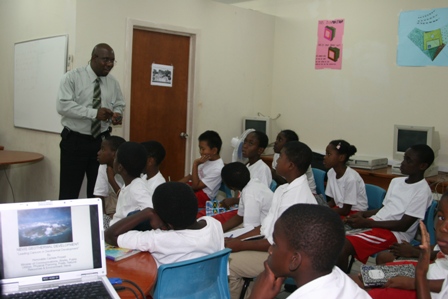 Minister responsible for Natural Resources and Public Utilities on Nevis Hon. Carlisle Powell engages students at the St. James Primary School on one of his island wide educational secessions with students on what geothermal energy was about and its importance to them (file photo)

The geothermal project commenced in Nevis in 2009 with an initial completion date of late 2010. According to an agreement signed between the NIA and WIP, the company was responsible for funding the US$43million project. However, due to the worldwide financial meltdown in 2009, the company had suffered some setbacks.

Recently, Mr. McDonald announced that financing had been secured for the 10megawatt Nevis project from Scotia Bank guaranteed by the Export Import Bank of the United States and work on the ground would commence in June.

Due to that setback, the NIA had accepted a request from WIP which sought to reschedule the delivery date of geothermal power to the people of Nevis from the latter part of 2010 to the first half of 2011.

Meantime, in response to a question regarding possible project delays during the approaching hurricane season, Mr. McDonald said it would be little affected.

“The project is not that much affected by the hurricane. If you remember when Omar came in, the last we had, that’s when we discovered Nevis 3 and they were still drilling. Other than those days when obviously you can’t get out at all, there is very little effect.

With regard to the growing attention the geothermal project continued to attract from across the globe, Mr. McDonald explained that Nevis had the distinction of having the most written about project in the world at present. 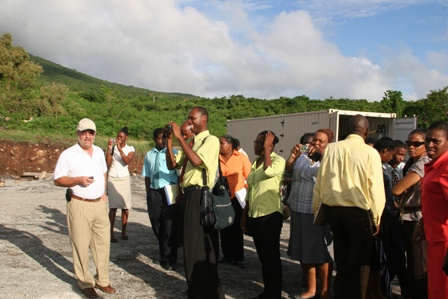 Teachers on a field visit to the bore hole at Nevis 3 in Hamilton with WIP executive Mr. Kerry McDonald in attendance. The trip formed part of a geothermal workshop for teachers throughout the Federation (file photo)

“The project is attracting lots of attention from everyone around the world for both studying purposes, how we were able to do this. I guess Nevis has the distinction of being one of the most written about projects in the world right now.

“It is such a classic story of finding the geothermal resource and finding it in the method that we did and then the ability to produce it. This was done over a three-year period and normally to do this, you are talking 10 years so that’s one of the reasons why everybody is so interested. We were able to do this so quickly,” he said.