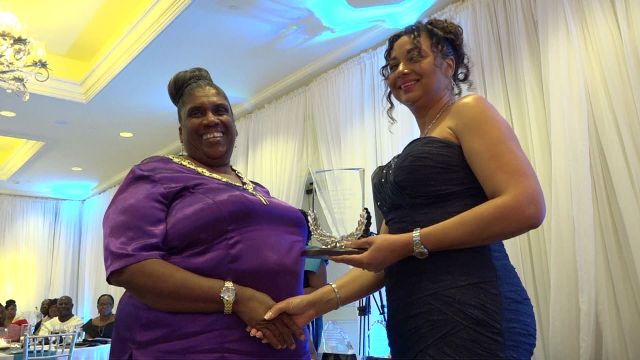 First Lady Mrs. Sharon Brantley (right) presents Ms. Sara-Ann Daniel, Operations Manager of Golden Rock Inn with the Ministry of Tourism’s Hotel of the Year Award at the ministry’s Tourism Awards Gala and Dance at the Four Seasons Resort, Nevis on May 26, 2018

NIA CHARLESTOWN NEVIS (May 29, 2018) — Golden Rock Inn in Gingerland, is the Ministry of Tourism’s 2018 Hotel of the Year. The award was presented to the hotel at the ministry’s annual Tourism Awards Gala and Dance at the Four Seasons Resort on May 26, 2018.

This year the event was held under the patronage of Mr. Theodore Kelly who worked with the ministry as a tour guide, from 2003 until his retirement in 2009. The Awards Gala was the final event on the Ministry of Tourism’s month-long calendar of activities dubbed “Exposition Nevis,” designed to engender greater tourism awareness. The theme was “Eat Well. Live Well. Be Well.”

Ms. Sara-Ann Daniel, Operations Manager at Golden Rock Inn, who received the award on behalf of the hotel, thanked the ministry on behalf of owners Helen and Brice Marden and the management and staff.

The hotel which celebrates 60 years this year, was once a working sugar plantation from 1815 to 1890. It was converted to a hotel in 1958 and has changed hands twice. Ten years ago, the current owners bought the property and transformed every area into what it is today.

In addition, seven other awards were presented. Mr. Olson Maynard, Security Manager at Four Seasons Resort, Nevis was named as Hotel Manager of the Year 2018. Ms. Stacy Parris, Front Desk and Reservation Supervisor at Oualie Beach Resort, was named as the 2018 Tourism Employee of the Year.

Mrs. Roslyn Jeffers of Nisbet Plantation Beach Club was presented with the award for Long Service in the Hospitality Sector 2018, with 29 years of continuous service at that establishment. Ms. Esmie Parris of Esmie’s Sunrise Bar and Superette received the 2018 Best Culinary Experience Award.

Hon. Mark Brantley, Premier of Nevis and Minister of Tourism, congratulated the awardees and referred to them as industry stalwarts.

He urged them to continue to be ambassadors for Nevis and never get tired of doing their very best to inspire those with whom they come into contact.