Cyclist Ms. Kristina Storey and Mr. Nick Arney of Australia who will launch their world tour from Nevis April 1st, 2012 at the Lime Beach Bar at Pinneys Beach and will conclude in February 2013 in Nevis

NIA CHARLESTOWN NEVIS (March 29, 2012) — Australian Guinness Book of Records contender for first and fastest women to go round the world by bicycle Australian Ms. Kristina Storey said, her project World by Cycle which will be launched from Nevis on April 1st and end on the island in February 2013, will benefit the young people of Nevis.

Ms. Storey told the Department of Information on March 22, 2012, ahead of the of the 30,000 kilometre expedition that nothing compared to putting the project which had an educational component together. She will be accompanied on her expedition by her fiancé also from Australia Mr. Nick Arney. The couple will across the world in 300 days to 26 countries and six continents.

“World by Cycle has been a year of hard work and bringing the project to Nevis and to the young people of Nevis…Not only are we riding around the world, we have also built an education programme and we have a team of curriculum writers who are building content around the places that we are going to be visiting. For each continent we are going to have a thematic unit about the people and about one particular item from that place,” she said.

Ms. Storey explained that the first story they will tackle will be about a tee shirt and its origins.

“So we are going to be meeting the people who farm and pick cotton. We are going to go to the factories in Western Africa, in Turkey, in Mongolia and China and we are going to be finding out how it’s processed, the effects that has on the climate and on our environment and all the different alternatives out there,” she said.

Mrs. Storey used the opportunity to urge students to use their website www.worldbycycle.info  to track their travels around the world. 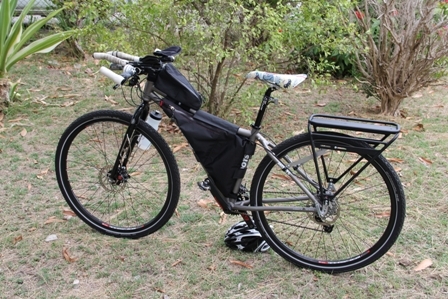 “We really love, love Nevis and we are so happy to be here and we are so, so thankful that we have been welcomed and we just want to do what we can to include the young people here in our journey. We hope that everybody follows along. We have a website, on the website I have a video where I talk about the importance of our affiliation with Nevis and we have a Facebook page and a tweeter account a well.

“On the website you can actually go on and there is an interactive map. The website is www.worldbycycle.info so you will actually be able to track us in the world where we are and it will have interactive features. I know you have done the One to One Laptop with young people, so they can take their laptops and go and see where we are and bring up a different country and there will be photographs, interviews, different details about that location and then they will be able to interact with young people from other countries in the world as well,” she said.

According to Ms. Storey, the website would allow young people of Nevis to talk to others from Argentina, Uzbekistan, China, and Canada and the other places to interact.

“You form a group you learn about water conservation in their countries and you tell them about all the amazing things Nevis is doing with their wind and their geothermal and you start to build innovations and solutions in a global classroom because that is the way the world is going.

“It is not classroom based education anymore but we really have the ability to reach out and make a really big difference and I think young people in Nevis can make that difference in the world and in the global community,” she said.

Meantime, Mr. Arney explained that the bikes they would use on the expedition were completely custom made for a self sustained journey around the world.

“We will be carrying everything we need to survive including our shelter, our food our cooking facilities and of course as we are telling the story our stuff we need to film and take photographs and stream media back to our base camps that will turn them into educational content.

Mr. Arney added that their project had received support in many ways among them Moots who built the handmade frames in Colorado, Old Man Mountain world renowned from Alaska who made the frame bags, Sram provide their drive train, Patagonia provided all their clothing for the journey, Cliff Bar provided nutrition and several education partners who would provide education support.

“We have got a documentary team that is out of Melbourne Australia that would be visiting us in a few places and streaming the content that we film as we travel and turning that into a documentary.

“It will be released by the end of our trip as well as the six or seven modules for each continent that we travel through so they will be making a high grade 20 minute video that will tell the story of each of these continents.

The world tour will be launched at the Lime Beach Bar at Pinneys Beach with a brunch from 9-11 am and members of the public are invited to be a part of the event.