Permanent Secretary in the Ministry of Youth and Sports Mr. Alsted Pemberton
NIA CHARLESTOWN NEVIS (March 30, 2012) — The 20th anniversary of the Gulf Insurance Primary Schools Championship will be held with a difference this year, with an official opening ceremony and parade on the afternoon of April 3rd while the events will kick off at the Elquemedo T. Willett Park from 12am the following day on April 4th.

The event which has harnessed and showcased the island’s athletic prowess for the past 30 years was an initiative of the Department of Education and the Nevis Amateur Athletic Association. Twenty years ago the Gulf Insurance Company based in Trinidad adopted the sporting event which has become the leading sports event on the school’s calendar.

At a press conference to launch the major schools sports championship on March 27, 2012, at the Red Cross Building’s conference room, Permanent Secretary in the Nevis Island Administration’s (NIA) Ministry of Youth and Sports Mr. Alsted Pemberton lauded the long standing sponsorship of Gulf Insurance Limited through its local agents A L. Evelyn Limited.

“One of the major sponsors as was indicated earlier is Gulf Insurance through its local agents A. L. Evelyn who is this year celebrating 20 years of sponsorship of this prestigious event. Any institution or entity which would have sponsored any event for 20 years must be highly commended.

“It tells me that this institution has some dedication, discipline and determination to ensure that the youths of our nation are well taken care of and as the Permanent Secretary responsible for the young persons on Nevis, I want to tip my hat to Gulf Insurance for their continued effort in ensuring that the youth of our nation continue to develop their athletic skills here on Nevis,” he said.

Mr. Pemberton thanked the Ministry of Education and the Nevis Amateur Athletic Association for what he said was their hard work over the last 30 years. 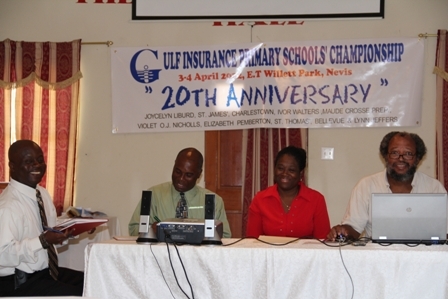 He noted that the Nevis Island Administration (NIA) through the Ministry of Sports continued to do all possible to ensure the success of the annual Sports Meet and provided the primary schools with the necessary facilities for sports.

“The Ministry over the years has been trying to ensure that all the schools have the facilities that they need to develop the children in terms of athletics. We would have provided new grounds at The Flats, in Brown Hill and in Cotton Ground. We still have some additional infrastructural work that we need to do but that will be completed in due course.

“We would have also started in conjunction with the Athletic Association to introduce the sand pit in the schools… On behalf of the Ministry of Sports I want to commend all the partners in ensuring that this year’s Mini Olympic would be a total success,” he said.

Meantime, representative of Gulf Insurance Ltd. the primary sponsor of the major sports event on Nevis Mrs. Lorraine Browne in brief remarks disclosed that they would be increasing their financial sponsorship.

“A.L. Evelyn Ltd. has the privilege of representing Gulf Insurance for the past 40 years but for the past 20 consecutive years, Gulf Insurance Ltd. has been sponsoring the Inter Primary Schools Championship which is now dubbed Nevis Mini Olympics. This is a strong indication that Gulf Insurance does not only take, it gives back generously into the lives of our youngsters.

“Even though these are hard economic times, Gulf has managed to increase our sponsorship this year to EC$40,500. I look at it this way it’s 20×2 with a little bit more,” she said. In its first year of sponsorship the Insurance company gave $750-$1000 but increased its contribution over the years. In 2011 they gave 35,000. 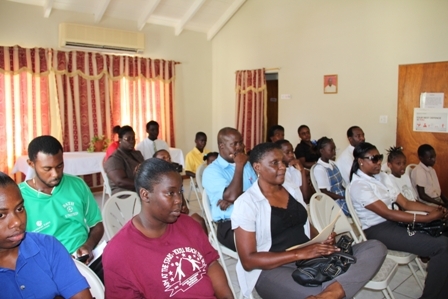 The Trinidad based insurance company, in recent times, had representation at the sports meet from its head office and according to Mrs. Browne, 2012 would be no different.

“Of course, Mr. Leon Williams is a very familiar face. We are also having Mr. John Barkley he has been here before but for the first time this year, we are having with us our Managing Director Mr. John Gonsalves here for the meet,” she said.