The Minister was at the time delivering remarks at the 18th annual Agriculture Open Day on March 29-30, 2012, hosted by the Department of Agriculture at the Villa Grounds in Charlestown. This year’s exhibition was held with the theme “Strengthening Cooperative Enterprises for Sustainable Agriculture Development”, under the patronage farmer/fisher Mr. Luther Williams of Brown Hill Village.

He said the Agriculture Department had achieved much over the years and reflected on their successes.

“As we reflect, we can indeed conclude that we have achieved the objectives of showcasing our success in agriculture; identifying interventions aimed at improving farm income and developing and introducing appropriate technologies suitable for different agro-industries and target beneficiaries.

“Indeed we have achieved much. However, let us not be complacent. Let us strive to include every possible stakeholder in the agricultural sector to participate in this event.

He spoke of the variety of exhibitors that were drawn to the 2012 Open Day and the impressive range and quality of products on display.

“This is testimony to the potential of our stake holders to become major players in production, consumption and the trading of various types of agricultural produce. These products include cotton, vegetables, jellies and wines, meats, livestock products and root crops. I take pride in this success, this economic opportunity and congratulate all the producers and exhibitors for a job well done,” he said.

The Agriculture Minister also recognised the contribution of the Patron, a retired fisherman and farmer with over 60 years experience in the fishing industry.

“Luther as we all know is one of the founding members of the Nevis Fishermen Supplies and Marketing Cooperative Society. He served as president for seven years and assisted with the management of the Fisheries Complex. The department of Agriculture and the Nevis Island Administration by extension salute you. 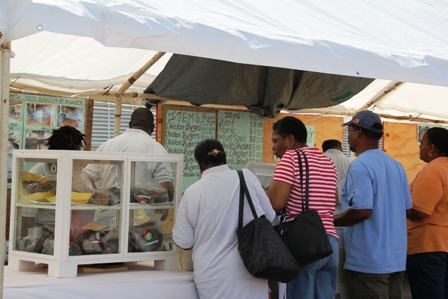 Mr. Williams it is my prayer that God would continue to bless you and your family. With so many years as a farmer and fisherman, I am confident that you have influenced at least one young villager to follow in your footsteps,” he said.

Notwithstanding, with regard to the cooperatives, Mr. Hector said the Department chose to focus its efforts in that specific area because 2012 was being celebrated as the International year of Cooperatives.

He said the time had come for a breath of new life into some of the existing cooperatives on the island and congratulated the efforts of the Cooperative Department and its role in the island’s development as an agricultural sector.

However, he challenged the longstanding groups to reflect and begin the necessary discussions aimed at the promotion of sustainability.

Mr. Hector pointed to the Junior Banking Saving at the primary schools which he said was doing well and applauded the Cooperative Division for its new thrust.

“I applaud the new vision of the Director of Cooperatives to begin the promotion of the thrift and industry among our church youths,” he said.

Meantime, the Minister publicly acknowledged all who had worked with the Ministry of Agriculture as he thanked the staff for their hard work and dedication to ensure the exhibition was staged for the past 18 years.

“I cherish the support you have given to me as Minister of Agriculture for the past six years. As a team, our achievements include the establishment of an agro processing facility; reintroduction of cotton as an export crop; increase in farmer base and acreage under production, removal of farmers from the use of low technology and exposed them to new and improved methods of production; offering great incentives to support the sector, created and maintained a by local campaign, doubled our refrigeration capacity at the Marketing Unit. 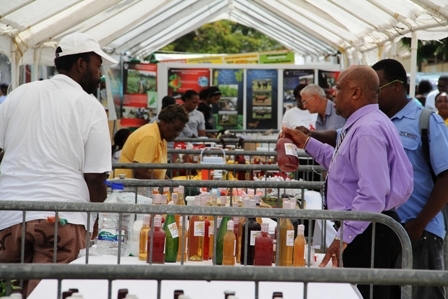 The Agriculture Minister also commended the teachers of both primary and secondary schools for their efforts which continued to expose students to agriculture.

He also thanked the Inter American Institute for Cooperation on Agriculture (IICA) through its representative Mr. Augustine Merchant for the shade house they had provided for the students of the Gingerland Secondary School and promoting agriculture among farmer organisations on Nevis.

The Caribbean Agricultural Research and Development Institute (CARDI) through its representative Ms. Pathleen Titus for the provision of a shade house which was being used as a demonstration unit at the agriculture station at Prospect.

He also thanked the Republic of China on Taiwan who recently donated a cheque of US$38,000 which would be used towards the purchase of a tractor in response to a request made at the Embassy in Basseterre.

Mr. Hector further disclosed that the small farm equipment pool at the Department of Agriculture would be complimented with two additional tractors thanks to the Federal Government and the Nevis Island Administration who he said had allowed for increased land preparation in a timely basis for farmers which would ultimately result in greater production yields.