(l-r) Chairperson Shoya Lawrence, Dr. Judy Nisbett Medical Officer of Health in the Nevis Island Administration and Chief Librarian Anastasia Parris at the opening ceremony of the Nevis Public Library summer programme at the Charlestown Methodist Church Hall on August 03, 2016
NIA CHARLESTOWN NEVIS (AUGUST 10, 2016) – Medical Officer of Health in the Nevis Island Administration (NIA) Dr. Judy Nisbett, commended the Nevis Public Library for its initiative to educate the youth about mosquitos and illnesses they carry.
She was at the time delivering remarks at the opening ceremony of the Nevis Public Library summer programme held at the Charlestown Methodist Church Hall on August 03, 2016. The theme for the programme is “Mosquito Borne Illnesses: Dengue, Chikungunya, Zika, and Yellow Fever.”
“I commend the Nevis Public Library Service for choosing the topic [on] mosquito borne illnesses for this year’s camp. It is timely since in recent years we have seen the emergence of new mosquito borne diseases in our region,” she said.
Dr. Nisbett added that the initiative would assist the Ministry of Health in creating awareness of mosquito borne illnesses.
“We at the Ministry of Health cannot do it all and we have to depend on each person to assist, including you the children…
“You will learn about the mosquito, the breeding sites, mosquito control and mosquito borne diseases. You have an exciting time ahead of you learning about mosquitos and things you can put into practise to avoid breeding in and around your house and how to protect yourself from being bitten,” she said.
Nisbett explained that there are several types of mosquitos including the Culex that transmits the West Nile virus, the Anopheles transmits Malaria and the Aedes aegypti that transmits the Chikungunya, Dengue Fever, Yellow Fever and Zika viruses.
In an effort to control the mosquitos breeding population on Nevis, the Ministry of Health has embarked on a series of initiatives. The Health Promotion Unit, hosts education sessions on mosquito and mosquito borne diseases. 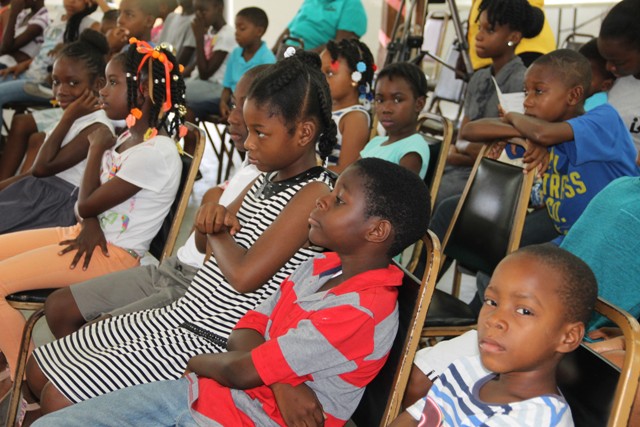 The Environmental Health Unit, which is responsible for eliminating breeding sites in public places, assists home owners to identify breeding sites in their immediate environment and eliminate sites discovered.
Their most recent initiative is their on-going mosquito awareness campaign celebrated under the theme “Eliminate breeding today! Keep mosquitos away!” which focuses on prevention and control of all mosquito borne diseases.
Chief Librarian Anastasia Parris gave the programme overview and Shoya Lawrence chaired the ceremony.