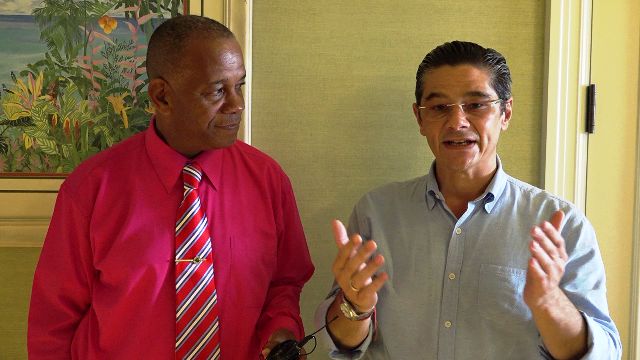 NIA CHARLESTOWN NEVIS (September 09, 2019) — Hon. Eric Evelyn, Minister of Community Development, expressed hope that managers at the Four Seasons Resort would be re-energised at the end of a session he facilitated at the resort on September 09, 2019.

Mr. Evelyn was invited in his unofficial capacity by Mr. Gonzalo Gëlman Ros, the resort’s General Manager, to lead a training session labelled “Level Up”for managers employed at the resort, ahead of the planned October re-opening, in an effort to re-inspire the team to do their best.

“This resort is extremely important to the island of Nevis and of course it is extremely important to the economy of Nevis. Four Seasons is the second largest employer on the island after the government and so we want them to realise how important the resort is to them, to the island and to all of us in Nevis. So I am delighted to be here, Gonzalo, and I hope that by the end of this session all of the managers will be re-energized to bring the best service ever to this wonderful resort,” he said.

The resort closed temporarily from June 01, 2019, to carry out major renovation work. The closure affected 361 workers who are expected to return to work by mid-September for retraining in time for the resort’s planned re-opening in October.

Mr. Evelyn noted that he had visited the resort last week and observed the extensive work being undertaken there and believes that once the work is completed Nevis will have a first-class resort.

He said he was humbled by the resort manager’s invitation to begin the retraining process.

“Of course we know that Four Seasons have had a great reputation of excellent service over the years, and we just want to remind the managers and remind of course all of the workers here at this resort that they are extremely important to the success of the resort,” he said.

Meantime, Mr. Ros explained that there were several reasons which led to his decision to invite Mr. Evelyn, and thanked him for accepting the invitation.

“We invite him because today we start the retraining of the team and we start from all the managers. So we are having a session which is called “Level Up”… That is to re-inspire our team to be the best ever.

“So Eric thank you very much for joining us. Eric is going to be the facilitator for this meeting and why we invite him? He is a celebrity on the island. He is extremely knowledgeable, and he’s a close friend to us. He has been someone who has shown me all his love since I have arrived two years ago and we know you will inspire all of us to do and to be the best. Thank you very much for doing this,” he said.