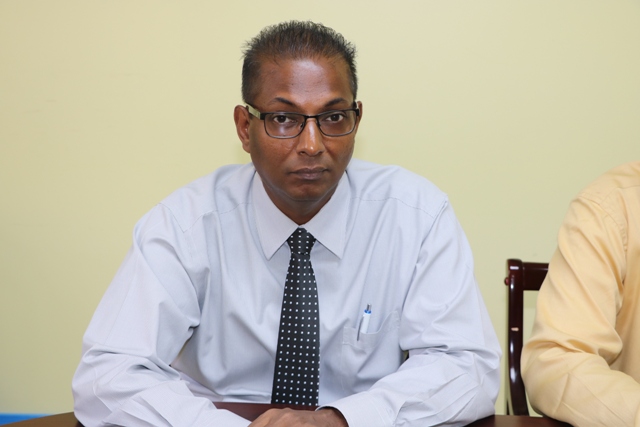 NIA CHARLESTOWN NEVIS (September 06, 2019) — Mr. Gilroy Pultie of St. Lucia, the new General at the Nevis Electricity Company Limited (NEVLEC), says he is pleased to take up his appointment and expressed his intention to do his best during his two-year tenure.

The new NEVLEC executive made his position clear after he was officially introduced by Mr. Stedmond Tross, Chairman of the company’s Board of Directors at NTv on September 03, 2019.

“I am very excited and enthusiastic about the challenge and I am going to do my utmost best to ensure that the vision that NEVLEC has of becoming one of the best run utilities in the world is achieved in the not-too-distant future,” he said.

The company’s new general manager indicated that his tenure comes with vast experience in the utility business.

“I’ve been in the business for more than 25 years, 15 of which have been in a senior management position. My experience and knowledge is very wide and relatively deep in all aspects of the business, and I do believe I have what it takes to make a major difference in Nevis and NEVLEC,” he said.

In an invited comment on September 06, 2019, Mr. Pultie noted that he was first approached to take up the position two years ago though at that time he had expressed no interest in the job. Six months later he decided to consider it.

“At that point I told NEVLEC that it was complicated in that there were some opportunities that were opening up in my company in St. Lucia which is LUCELEC [St. Lucia Electricity Services Limited] and so the chairman mentioned to me that he is prepared to engage my CEO in terms of a secondment…So they had discussions.

“Even before that happened I came up for an interview, the Board interviewed me and when I was offered the job and I went back to St. Lucia. The chairman and my CEO had a discussion regarding a secondment which led to me coming across to NEVLEC as the GM. I will not be at NEVLEC beyond a year to two years,” he said.

Mr. Elford Felix a Mechanical Engineer who had worked with NEVLEC from 2003 to 2008 as the Generation Manager and was recently re-hired as a Generation Consultant was also present at NTv.

He said during his previous tenure with the company he had succeeded in bringing the station up to capacity, and the public would remember the experience of enjoying a reliable electricity service at that time.

Mr. Felix noted that he was approached to return to work with the company and explained why he decided to take up the offer.

“Now I am back at work again, came out of my retirement because of my love for Nevis. My love and passion for what I do is why I am back here. The people are very friendly. The people I work with are very wonderful people.

“I am here to continue the hard work. It won’t be easy. It’s been hard work in order to refurbish the old engines which are now in disarray. I will do all my best to bring them back to capacity as they were before and return the Generation Department to its glory days which is going to be second to none. This is what I intend to produce before I leave here,” he said.