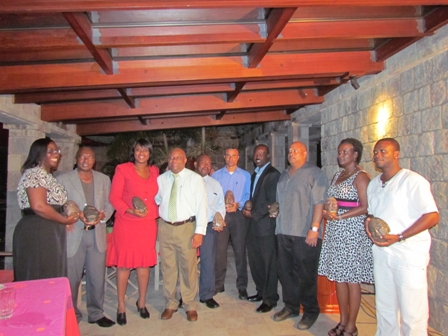 Awardees at the Nevis Division of the St. Kitts/Nevis Hotel and Tourism Association Awards ceremony with Deputy Premier of Nevis Hon. Hensley Daniel (fourth from left)
NIA-CHARLESTOWN NEVIS  (December 07, 2011) — The Nevis Division of the St. Kitts/Nevis Hotel and Tourism Association publicly honoured a mix of 10 persons/business places recently for their contribution to the development of tourism on Nevis over the past year.
President of the St. Kitts and Nevis Tourism Association Mr. Nick Menon in brief remarks at the event held at the Old Manor Hotel in Gingerland on November 28, 2011, lauded the efforts of the Association’s Nevis branch for successfully improving its profile and recruitment of new members.
He said the Award ceremony, the second of its kind on Nevis, had become an important date on the tourism calendar of Nevis.
“We thought this was an important date in the tourism calendar both at the start of the season to galvanise everybody’s attention to focus on the season ahead of us and to recognise those individuals who are stalwarts for our industry both businesses and individuals who make Nevis, St. Kitts [and] the federation truly what it is,” he said.
The award, carved out of Nevis Volcanic stone was made by local sculptor Mr. Marvin Chapman was handed out by Deputy Premier of Nevis Hon. Hensley Daniel as the names of the winners were revealed.
The Four Seasons Resort won the award in the Most Significant Property Improvement category ahead of other nominees Coconut Grove Restaurant, Golden Rock Hotel and Sea Food Madness. 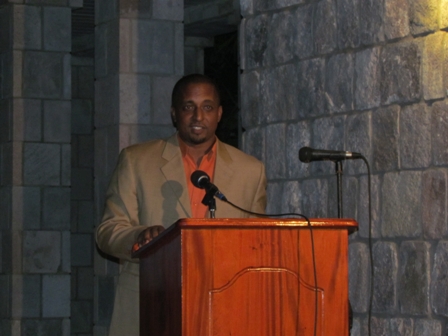 In the Utility of Year category the Nevis Solid Waste Management Authority emerged winner. The other nominees for that category were LIME, DIGICEL and the Nevis Electricity Company Limited (NEVLEC).
Sea Bridge St. Kitts Nevis Inc. won the award in the Two Islands One Paradise category for its ferry service between St. Kitts and Nevis. The other nominees were water taxi owner Mr. Ian “Coby” Gonzales and TDC.
In the Best Airline Partners category airline carrier WINAIR won. Other nominees were Costal Air and British Airways.
Mr. Greg Phillip won the Sports Tourism Award.  Ms. Debbi Wallace, Mr. Winston Crooke and Mr. Reggie Douglas were also nominees in that category.
The Business of the Year Award went to Coconut Grove Restaurant. However, the other nominees were Mr. Winston Perkins of Islander Water Sports, Oualie Beach Resort, Dion and Associates Ltd. and the TDC Group of Companies.
Service Employee of the Year went to Mr. Shirlon James of TDC and Coconut Grove Restaurant. Other nominees for that category were Ms. Doreen Hodge from Sugar Mill Estate, Ms. Marcella Isles from Oualie Beach Resort, Carty Simmonds from Montpelier Plantation and Nisbett Plantation, and Ms. Lavern Liburd of TDC Airlines and Coconut Grove Restaurant.
The Hotel Tourism Supervisor of the Year was won by Mr. Dan Perkins but the other nominee was Mr. Patterson Flemming. Both nominees came from the Nisbett Plantation Beach Club with over 25 years of loyal service to the tourism business on Nevis.
The Value Added Award was won by Ellis Chaderton owner and operator of Scuba Safaris Ltd. at Oualie Beach. The other nominee was the Nevis Island Administration who put together a programme with duty free imports for hotels and restaurants at a time when the economy was down.
Best New Business award was one by Cape Air. The other nominees for that category were Horsfords Valu Mart and IGA, Riviera House and Cape Air.