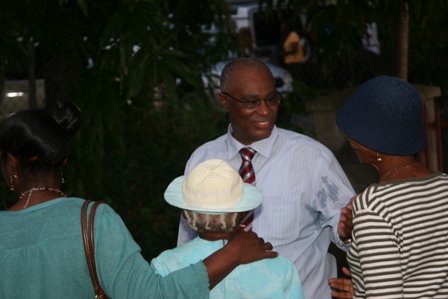 (CHARLESTOWN, NEVIS–MONDAY, NOVEMBER 1, 2010) Total development of the human person is the objective of community centers around the island of Nevis,” said the Premier of Nevis, the Hon. Joseph Parry moments before he turned the sod at the Ground breaking ceremony for the Jessups Community Center on Friday afternoon.

“The community center will be 3,600 sq. feet and will be comprised of a reading room, a library and a computer room.  The supervised facility will be for the development of the village of Jessups and the enhancement of the people of Jessups,” said the Premier.

In addition to the Jessups Community Center, there will be five community centers built by the Nevis Reformation Party (NRP)-led Administration.

“There will be community centers in Jessups, Cotton Ground and Combermere. A center in Fountain will start shortly and Charlestown will also get a community center soon,” commented the Premier.

The Premier noted that the Government was not simply building community centers for building sake but to enhance the people who use those buildings for training, educating and personal growth.

He went on to say that Deputy Premier and Minister of Social Development, Hon. Hensley Daniel was a “man of action” and was already arranging for the centers to be outfitted with computers so that programmes will commence immediately after they are opened. Mr. Parry said if the buildings were not put to use they would serve no purpose.

During the ceremony, the Hon. Parry spoke of the Fine Arts Theatre presently under construction at Pinney’s, when completed; the theatre would comfortably seat 400 persons.

“As you drive pass and see the beauty of the Fine Arts building, you can see what this NRP-led Government is about, this is how we are going about this.  We are ensuring that the people come first and that people are in the front line,” said Premier Parry. 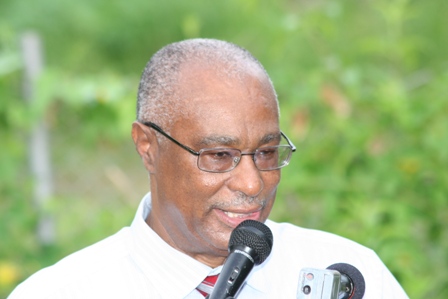 Meantime, while he discussed the Four Seasons Resort, Premier Parry asked the audience to remember the matter of stones placed near Mangoes Restaurant which had prevented the people of Jessups from walking the length of the beach.

“Let me tell you, despite what anyone is saying, you will not have to climb upon the people’s property. You will be walking on sand from the Four Seasons pass the Mangos Restaurant right up to where the boats and the people of Jessups bathe because this government has demanded and we have gotten the approval from Four Seasons that the stones will be removed and it will be done at no cost to this Government,” commented the Premier.

With regard to the Four Seasons Resort’s reopening in December, the Premier spoke of the pro active stance he and his government had taken to facilitate the opening. He said he pushed forward by hiring lawyers from the United States and locally, in a bid to get Four Seasons Resort-Nevis up and running.  He mentioned that the lawyers had made it very clear to the United States Court that the opening of the luxury resort was important to the people and the economy of Nevis.

“Now the matter is settled and the Four Seasons Resort-Nevis will be opened on December 15th 2010,” exclaimed the Premier of Nevis.