(L-r) Ms. Inci Otker, the International Monetary Fund’s Mission Chief for St. Kitts and Nevis and Hon. Vance Amory, Premier of Nevis and Minister of Finance at the Ministry of Finance conference room on April 21, 2017
NIA CHARLESTOWN NEVIS (April 24, 2017) – A team from the Ministry of Finance in the Nevis island Administration (NIA) led by  Hon. Vance Amory, Premier of Nevis were among stakeholders who met with a team from the International Monetary Fund (IMF) on April 21, 2017, as part of the IMF’s annual economic assessment exercise in St. Kitts and Nevis.
Ms. Inci Otker the IMF’s Mission Chief for St. Kitts and Nevis said the meeting in the Federation is a regular consultation to assess the economy’s performance. The team’s visit began on April 18, 2017 and concludes on May 03, 2017.
“We are looking at the macro economic situation, how the financial system is doing as well as some of the social issues and this year particularly we are focusing on not only how the macro-economic and financial situation has been in terms of stability and so on,” she said.
Ms. Otker added that the team was also looking into social issues, and focussed on the status of the unemployment rate; how the inequality and poverty indicators are doing and how wages are determined. They are also looking into the health care system and the fiscal implications of planned universal health care coverage. 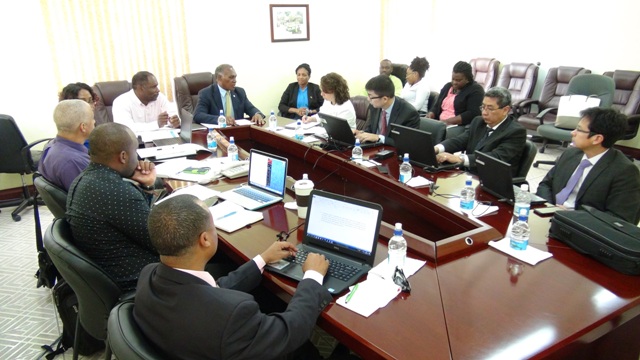 The IMF official explained that at the end of the assessment, they would have an overall picture not only micro economically but one which would also encompass the development and sustainable inclusive growth to be achieved in St. Kitts and Nevis.
On conclusion of the mission, a staff report will be issued at the end of May or June. Ms. Otker says she is hopeful the team would be able to provide some useful recommendations going forward.
Mr. Amory described the discussions as productive. He noted that by the end of the meeting, the IMF team would be appraised of the steps the Administration is taking to manage its finances, control its debt and to manage concessions for businesses.
He pointed to the manner in which concessions are granted to businesses. He said the Administration is ensuring that they are granted for productive enterprises which create employment, so that the revenue foregone by government is reflected in activity stimulating growth in the economy.