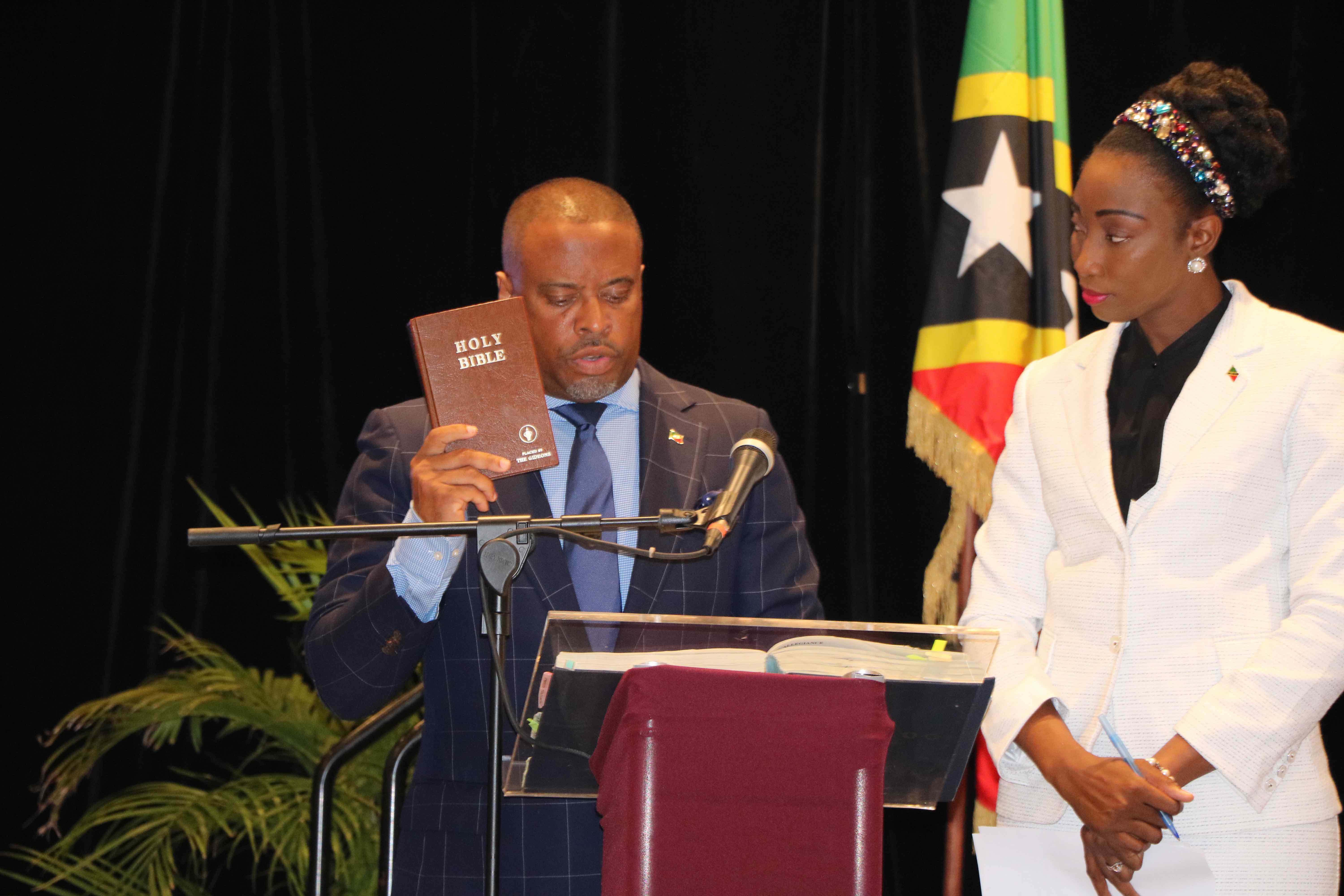 NIA CHARLESTOWN NEVIS (JULY 08, 2020) –  Hon. Mark Brantley, Hon. Alexis Jeffers, and Hon. Eric Evelyn took the Oath of Allegiance at the Opening of the National Assembly of St. Kitts and Nevis at the St. Marriott Resort on Wednesday, July 08, 2020, and are now officially members of the Federal parliament.

They took their oaths before Hon. Michael Perkins who was re-elected as Speaker of the National Assembly for the second time. Also present were dignitaries, government officials, family members of the parliamentarians and other invited guests.

Also taking the Oath of Allegiance in the National Assembly were the other Cabinet Members of the Dr. Timothy Harris–led Team Unity Administration.

Commenting on his new role as a federal parliamentarian Hon. Evelyn said he feels privileged to serve his constituents and the people of the wider nation at this level.

“I pledge to give my utmost in terms of quality representation and I will do all I can to ensure the departments over which I have responsibility will have more impact over the next five years,” he said. Mr. Evelyn serves as the Federal Minister of Environment and Cooperatives.

Hon. Jeffers, also sitting in the national parliament for the first time, vowed to use all his expertise as an elected member of the Nevis Island Assembly and Minister in the Nevis Island Administration to make advancements under his portfolio of responsibilities, that will have meaningful impact on the lives of the people of the federation. Mr. Jeffers is the Federal Minister of Agriculture, Fisheries and Marine Resources.

Premier Brantley, Minister of Foreign Affairs and Aviation pledged that as part of the government, the three Nevis parliamentarians would continue the level of leadership exhibited over the past five years.

“I think that our people can look forward to continued good representation and service which puts them first,” he told the Department of Information on the margins of Wednesday’s ceremony.

Hon. Michael Perkins, from the Speaker’s bench, congratulated all the elected members, in particular the newly-elected, first-time members of parliament.

“I implore our members to be aware that there are people looking at us, and at the end of the day people will judge us, and our legacy will be all that we have.

“This is now the dawn of a new day. I can only implore all of us to step up our game and do all that we can in service of this National Assembly and nation on a whole to the best of our ability,” he admonished the members.