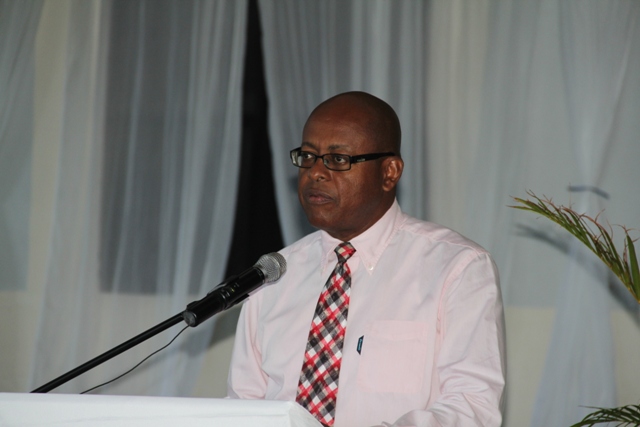 Laurie Lawrence, Permanent Secretary in the Ministry of Finance, Nevis Island Administration
NIA CHARLESTOWN NEVIS (March 04, 2014) –The Nevis Island Administration (NIA) will continue to invest the necessary resources to enhance knowledge in the financial sector. That disclosure was made by Permanent Secretary in the Ministry of Finance Laurie Lawrence when he delivered remarks at the Nevis Financial Services Regulation and Supervision Department’s 2014 Anti-Money Laundering (AML) and Counter Financing of Terrorism (CFT) Seminar and Training workshop at the Occasions Entertainment Arcade on March 03, 2014.
Lawrence explained, that the Administration was committed to taking the necessary actions to ensure the Sector’s longevity.
“We will continue to provide formal and non-formal education for the staff of the Financial Services Department and the citizenry as a whole. We will continue to improve regulation and supervision to comply with the international standards. We have begun the process of upgrading the technology at the corporate registry.
“We signed an agreement with IBM last year and work is ongoing to build a state-of-the-art registry to provide online access to service providers. We will also continue to upgrade legislation to give us the competitive edge in supervision and product development,” he said.
The Permanent Secretary further stated that the first reading of legislations to amend the Nevis Business Corporation Ordinance and the Nevis Limited Liability Ordinance had already taken place in the Island Assembly and following further consultation with service providers he was hopeful the amendments would be passed during 2014.
In the near future, he said, there were plans to table amendments for the Trust and Insurance legislations and they were also finalizing the draft of Modern Banking Legislation which if passed this year, was expected to give a boost to the Banking Sector.
Lawrence said the jurisdiction was a progressive one in which the authorities would continue to embrace and utilise knowledge to enhance the image and reputation of the financial sector.
“We will continue to strengthen collaborative networks with the Service Providers including STEP and NIPA [Nevis Investment Promotion Agency] to advance Nevis as a reputable and high-quality financial centre.
“However we can only achieve this goal by nurturing the development of a cadre of knowledge workers who can use their creativity and imagination to give Nevis a competitive edge in the global financial industry,” he said.
According to Lawrence, the success of the jurisdiction was contingent on a closer partnership forged between the government and private sector to promote research, sharing of ideas and training initiatives that would create a solid knowledge base as the spring board for a competitive advantage in a dynamic global industry.
The Permanent Secretary also reminded that the fact that the workshop had become a fixture on the NIA’s annual calendar of events was testament to the Government’s commitment and determination to aggressively fight against money laundering and terrorist financing as the island continued on its path to develop the jurisdiction as a premier international financial centre.
“Let us plant the seed now so Nevis can thrive as a successful and premier financial centre,” he said.