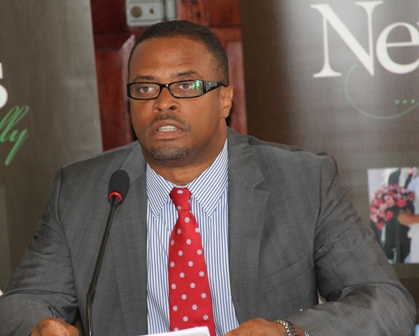 Deputy Premier and Minister of Tourism Hon. Mark Brantley
NIA CHARLESTOWN NEVIS (November 07, 2013) — Deputy Premier and Minister of Tourism on Nevis Hon. Mark Brantley, announced on November 06, 2013, that an impending suspension of services by the Leeward Islands Air Transport (LIAT) to the Vance W. Amory International Airport prompted the Nevis Island Administration (NIA) to actively seek an alternative carrier that would fill the void created from December 03, 2013, to January 14, 2014.
Mr. Brantley explained that a letter dated November 01, 2013 from LIAT’s management, prompted the Administration to seek other airlines that would service the destination, given that LIAT’s absence would fall at a peak time in the island’s Tourist season.
“It is my task as Minister of Tourism to advise you that we have had recent communications from LIAT, our regional carrier that they will be suspending their service into the Vance Amory International Airport by way of letter dated November 1st 2013.  They provided an update to the Nevis Island Administration with a letter directed to me indicating their flight schedule and changes to that schedule and indicating that it will, let me use their words “negatively impact their service into Nevis”.
“The reasons they have given and I quote ‘as a result of the fleet transition is currently underway and limited resources they are unable to provide a service into Nevis for the period of winter, 2013, which will commence on the December 3rd 2013 and will continue on to January 14th 2014,” he said.
The Tourism Minister further noted that LIAT’s management had assured that they would seek to resume the services on January 15th and would provide the Administration with a further update sometime in December.
However, the Minister believed that news of the suspension was not good for Nevis, since airlift into the island was critical to its development and the pull out would come at the worst possible time.
“Now this is not good news for us and we as an Administration are convinced, that airlift into the Vance Amory International Airport is absolutely critical for the growth and development of Nevis, especially for the growth and development of our tourist industry and so this announcement by LIAT, comes at the worst possible time for us,” he said.
Mr. Brantley also spoke to the recent strides that had been made with the addition of new airlift into Nevis
“The public will be aware that we have had some strides and have had some success in getting additional airlift into Nevis from San Juan, Puerto Rico, in addition to Cape Air which had a seat capacity of 14 seats per day into and out of Nevis from San Juan. We have now added Tradewind Aviation which has added 16 seats per day bringing our total up to 30 and we hope to add another carrier very soon and we will have that announcement, we hope, this week for the general public,” he said.
Notwithstanding, the Tourism Minister explained the importance of the routes served by LIAT and the alternative airlines that were being sort after.
“The Antigua-Nevis/Nevis-Antigua leg is also very important and that is being served by LIAT. LIAT has now pulled out from the period as they’ve indicated December 3rd until January 14th next year and it is now for us to get some alternative for LIAT to get our people into and out of Antigua. 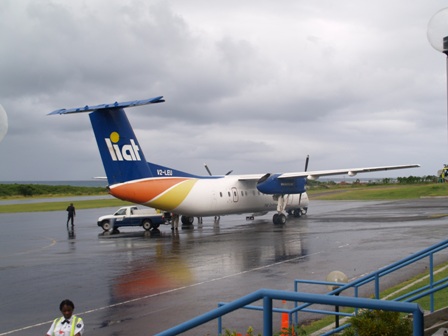 “I can assure the public that we have already engaged in conversation with some other carriers. We are speaking to SGV Air; we’re speaking to Fly Montserrat; we’re speaking to BVI Air and we’re speaking to Tradewind. We’re talking to all of them with a view to see how best we can accommodate the traffic from Antigua and to Antigua, so that our people can connect out of Antigua for onward journey’s especially intra-regional travel,” he said.
According to Mr. Brantley, his decision to apprise the public of the impending situation regarding LIAT was to allow them to make alternative arrangements ahead of that time.
“I wanted to come to the public and to alert the public as to this development, so we can make alternative arrangements, alternative travel plans and to assure the public that this Administration will continue to work hard, continue to work tirelessly to ensure that we have airlift into the Vance Amory International Airport,” he said.