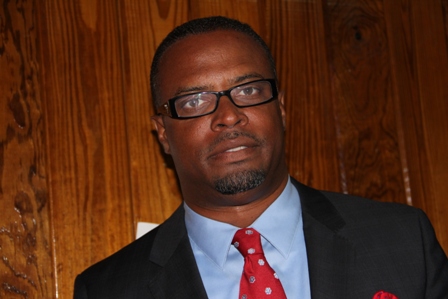 NIA CHARLESTOWN NEVIS (November 07, 2013) — Deputy Premier and Minister of Tourism on Nevis Hon. Mark Brantley, expressed the view that the time had come for Nevis to expand its horizons and attract other airlines apart from the Leeward Islands Air Transport (LIAT) that could service the island from other parts of the Caribbean.

The Tourism Minister’s comment came when he made a statement on November 06, 2013, which gave notice of LIAT’s impending suspension of service to and from the Vance W. Amory International Airport from December 03, 2013 to January 14, 2014. He received official notification of the move from LIAT’s management in a letter dated November 01, 2013.
“We are doing our best to engage and to engage on a longer term basis. We are saying to these alternatives that we want them to have a long term relationship in Nevis on this route. We’re not saying we just want you to come in for this month but rather can we have a long term relationship, so that our people can have alternatives…
“Thus far despite what they have said in the letter, I am still not getting a hard commitment from them come January 15th they will be back. They are saying ‘We’re seeking to resume services’ and so I am still not getting a hard commitment from them in relation to that,” he said.
In addition to the matter of a firm commitment for resumption of service, Mr. Brantley said there was the issue of seat guarantee.
“The other difficulty we have from LIAT is the demand of seat guarantee from us, so the Administration has to pay in order to bring them here and so we now need to start looking at alternatives, and look and see what else is available.
“I’m not hitting LIAT I’m simply saying it is time for us to widen our reach and widen the options that are available to our people of Nevis. So that is what we are doing, right now Tradewind does the traffic from Antigua to St. Barths, so Tradewind connects with Virgin Atlantic to take people going to St. Barths so it might be an option for us to consider,” he said.
According to Mr. Brantley, LIAT’s reason for the suspended service was fleet transition and limited resources which he said would adversely affect travel to and from the island.
“It’s clearly winter; it’s the height of our tourism season and so our visitors who are coming from England in particular, many of them come via Antigua and so the difficulty that we have is that our traffic via Antigua from the UK is going to be negatively impacted.
“Of course we have the benefit now of British Airways flying into St. Kitts and so that might provide some relief. However, for those who travel Virgin Atlantic or any of those carriers are the many people who come via Antigua. Even from the United States, there are some who choose to come via Antigua, so that is a hub that we cannot ignore. Even as we are building traffic to and from Puerto Rico, we also have an obligation to continue to ensure that our traffic to and from Antigua is not impacted negatively,” he said.
Mr. Brantley also spoke to the impact on local travellers to and from other parts of the region who utilised the services of LIAT.
“The other bigger problem though, is the local traffic that is our people who have to go down to Barbados, who have to go to Trinidad who have to go to places like that, clearly on business or for medical or other reasons. It creates a very real problem for us because we use Antigua as a major hub to go southward and the need to go northwards in terms of the Caribbean and so we are going to have a difficulty there and so this is really a blow to Nevis for LIAT to have announced their pull-out.
“Clearly they have assured us that come January 15th they will resume the service but certainly we are in a situation where for just about a month and a half Nevis is going to be out of that link and so we’re  already engaging other carriers to fill that void,” he said.