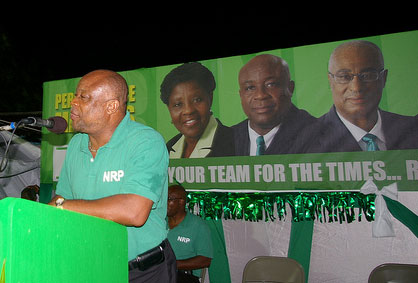 Minister Daniel’s plea follows recent public outburst and disapproval by the Government and people of Nevis over the continued absence and non-participation of the elected opposition legislators in the Nevis Island Assembly. Both of the elected members of the opposition bench have failed to show up for work in the legislature for every single sitting of the law-making body since the July 11th Election. “One member did show up to be sworn in but he left immediately after and did not participate in the debate of any of the legislation that has been brought to the Assembly; that does not count as showing up for work.”

The incumbent Nevis Reformation Party Administration returned to office for a second term following the July 11th poll with a stronger mandate, securing not only the majority of the elected positions in the five-member legislature but also securing the majority popular vote nationally.

After coming under heavy pressure from the media on Tuesday, Vance Amory, leader of the opposing political party in Nevis, who has failed to show up for work or to be sworn in the Nevis Island Assembly since the July 11th Election, told the St. Kitts Press that on October 27th, he did not know that the sitting of the Assembly scheduled for October 28th had been changed to Monday October 31st.

“I know that the former senator, Mr. Brantley, who is no longer a member of the Nevis Island Assembly, has refused to accept his defeat in the July Election and has refused to accept that I beat him fair and square and he has taken his objection to the Court. But is the business of the people of Nevis supposed to stop because he has a problem with the result? Is the island Government supposed to be at a standstill for one man who blames everyone else except himself for his defeat?”

Since July’s election result, not one member of the opposition has contributed to any of the legislation passed in the Assembly and one member, the leader of the opposing party has refused to show up to be sworn in.

It is expected that questions will surface at the next meeting of the legislature about payment of salaries to the two members of the opposition who have refused to show up to work in the Assembly since the July election. It is also expected that the President of the legislature will be asked to make a ruling on the position of the leader of the opposing party who has now missed three consecutive opportunities to be sworn in.