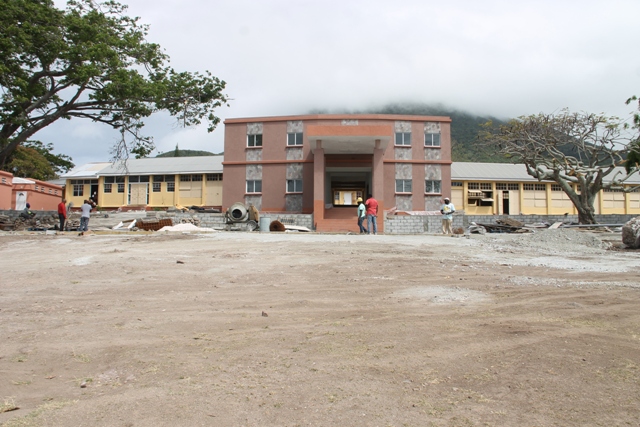 The new administrative block (at the front) and the student’s new washroom facilities (extreme left) at the Gingerland Secondary School on April 20, 2018, during a site visit led by Hon. Spencer Brand Minister responsible for Public Works on Nevis

NIA CHARLESTOWN NEVIS (April 20, 2018) – Major renovation work at the Gingerland Secondary School (GSS) is nearing completion, and the school’s administrative block is expected to be available for use in the coming weeks.

Mr. Deora Pemberton, Director of the Public Works Department on Nevis made the disclosure while on a guided tour of the work site on April 20, 2018, with a team led by Hon. Spencer Brand, Minister responsible for Public Works on Nevis.

“We started this project late last year and we are now in the finishing stage. We’re anticipating that within the next couple of weeks, the building can be occupied by the managers and administrators/principal of the Gingerland Secondary School,” he said.

The project to expand the facility and conduct major repairs commenced at the end of the school term in 2017. It formed part of the Nevis Island Administration’s (NIA) plan to revamp a number of public schools on the island.

“Basically all the work on the interior is about completed… We are completing walkways and retaining walls… so we are indeed happy to report that we are nearing the completion,” he said.

The Minister thanked the teachers and students on behalf of his Cabinet colleagues for their tolerance with what he described as sometimes overwhelming interruptions which they endured throughout the project.

He expressed hope that once they assumed responsibility for the facility, they would take care of it and continue to perform at the high level they are known for.

Mr. Brand thanked Dr. Ernie Stapleton, Permanent Secretary in the Ministry of Communication and Works, Mr. Denzil Stanley Assistant Permanent Secretary and Mr. Pemberton for their hard work and commitment to ensure the successful execution of the project.