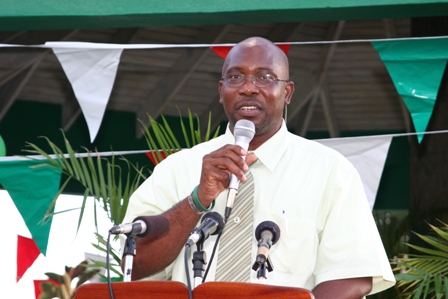 Junior Minister with responsibility for Communications and Works in the Nevis Island Administration (NIA) Hon. Carlisle Powell, underscored the government’s commitment to make life better for all Nevisians. He made particular reference to a number of villages in the St. Thomas Parish, which had been neglected by the past administration.

Mr. Powell was at the time delivering remarks at the official handing over of the bus stand/gazebo from West Indies Power to the NIA and the opening of the Cotton Ground/Barnes Ghaut/ Jessups Road. The event was held on August 08, 2008, during a ceremony held at Five Turnings in Cotton Ground.

“Today we are here to salute the Hon. Premier as we realise the fulfillment of another campaign promise of this Nevis reformation Party [NRP] government. We promised to make life better for all Nevisians and we started with you the proud people of St. Thomas’ who had suffered more than most…

“When we said that NRP would look after your needs, we meant it. This is why we are here this afternoon to bring a quality road and a sense of pride to you the people of this area,” he said. 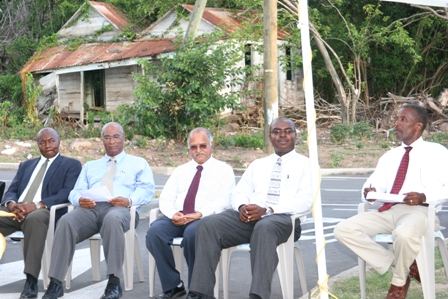 The Minister also used the opportunity to highlight the NIA’s unparalleled record in road construction since it assumed office in July of 2006 and referred to the 5.3 miles of the Island Main Road from Market Shop in Gingerland to the St. James Anglican Church.

“This stretch of road is one of the best pieces of road construction in any of our Caribbean islands. The only fault some people found with it is that the road is too straight and we were wrong to take out the corners.

“Three point four miles of road in Jessups, Barnes Ghaut and Cotton Ground to satisfy the needs of the people who have been ignored and ostracised just because they continued to vote for the Hon. Joseph Parry,” he said.

Mr. Powell also referred to an ongoing 2 mile road project in Charlestown which would improve the road network in Ramsbury, Hamilton, Government Road, Stoney Grove and the Stoney Grove by pass and 3.5 miles of road in Cox Village.

He pointed to the NIA’s commitment to new main roads in Hanleys Road in Gingerland and Cades Bay to Camps via Westbury and Fontain and to mend a past poorly constructed section of the Island Main Road from Cotton Ground to Newcastle.

Meantime, Mr. Ernie Stapleton Permanent Secretary in the Ministry of Communication and Works in a brief report of the Cotton Ground/Barnes Ghaut/Jessups Road Project said that the project was completed at a cost of EC$16.5 million though the contract price was EC$15 million. The extra 1.5 million was due to extra works which included drainage and a play ground at Barnes Ghaut Village. 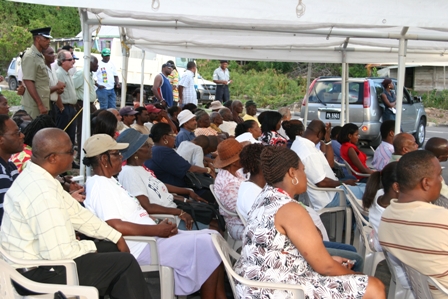 He explained that the project consisted of a brand new road/carriage way from the fuel station at Jessups past the play ground at Jessups, portion of Four Seasons Golf Course, Fern’s Estate, Barnes Ghaut Village, Paradise Estate and ended at the junction in front of the St. Thomas Church/Villa Paradiso. In addition there was another branch from Barnes Ghaut Village through to Paradise Estate, Cotton Ground Health Centre and ended at the Cotton Ground junction.

Mr. Stapleton said too that the Jessups Junction, the Paradise junction near the St. Thomas’ Catholic Church and the Cotton Ground junction were all substantially improved including drainage.

Throughout the road, he said that curbs, slipper drains and box drains were constructed and all road works were done with imported base material and aggregate for the asphalt work. However, asphalting was done by the Public Works Department with the supervision of the contractor National Piling Co. Ltd.

According to Mr. Stapleton, new water lines were placed in most areas while in other areas existing waterlines were deepened. Property entrances and drive in accesses were provided and some fences were replaced wherever road affected private properties that had fences.

In addition, a bus shelter/gazebo was erected at the junction of Cotton Ground which was financed by West Indies Power Nevis Ltd. It was constructed by Malvern “Molly” Jeffers of Cotton Ground.