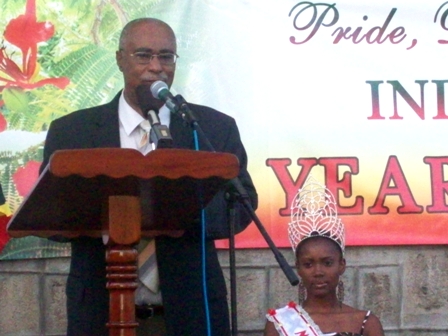 “This afternoon is a special time for us, as it is the beginning of the celebration of our 25th Anniversary. It was 25 years ago that St. Kitts and the island of Nevis, this twin island nation, took the bold step of Independence. It was 25 years ago that this island with $250,000 started the government of Nevis. Many persons had low expectations, because a small sum of $250,000 was not expected to take us anywhere.

“I must say that we had a country that had a number of problems. We had a problem with Infrastructure, roads, water services, electricity, and telephone communications. However, today I am proud to say to you that we have overcome all of our infrastructure and utility problems and on top of that, we have some of the best roads in the Caribbean, here on the island of Nevis,” Premier Parry said.

Today in Nevis, according to the Premier, the island had a water system in which every household could boast of having running water 24 hours a day.

“We have every reason to be proud, especially since last month, the Nevis Reformation Party led-Nevis Island Administration, had implemented one million gallons of water into the system,” said the Premier.

In the area of electricity, the Premier pointed out that he was proud that Nevis had a son of the soil, Mr. Cartwright Farrell, at the helm of the Nevis Electricity Company Ltd. (NEVLEC), a position in which he had given good service to the people of Nevis.

“It is a demonstration that Nevisians are as good as anybody else and better than many others,” he said.

He also thanked the first Premier of Nevis, the Hon. Simeon Daniel for his role in the progress of education on Nevis. The Nevis Reformation Party, under the leadership of Simeon Daniel, made education its first priority. Pre-schools were established in Charlestown, Gingerland and St. Thomas.  Under that leadership a Sixth Form was established in Nevis and every Nevisian gained access to a Secondary education, it was a first for Nevis and the Organisation of East Caribbean States (OECS).

Mr. Parry said too that the first serious Land Reform Programme was a result of the government of Nevis under the Nevis Reformation Party 25 years ago. It was done to ensure that the people of Nevis were able to purchase land at an affordable price.

The NRP-led Administration has continued its land and housing programme throughout the island.

“The government of Nevis continues its program of home construction of affordable homes and more Lands will be available soon in Simmonds, Jessups, Cotton Ground, St. Johns, St. James and St. Paul’s, so that any progress that Nevis receives will be given to all,” he said.


In the area of Agriculture, the Premier noted that Nevis was among the first to provide a Marketing Department and an irrigation system, which had assisted farmers to sell their products to the Four Seasons Resort and other local markets.

He said the University of the West Indies has recently congratulated the Nevis model of the Agriculture-Tourism partnership.

“And what will be the centrepiece for the future of Nevis?” Premier Parry asked the audience.

“The answer is geothermal energy, which will lead to cheaper electricity bills, more jobs and royalties from the selling of the geothermal resource to other islands in the region.

“Geothermal energy in Nevis will be revolutionary and it will change the face of this island in a big and positive way!”