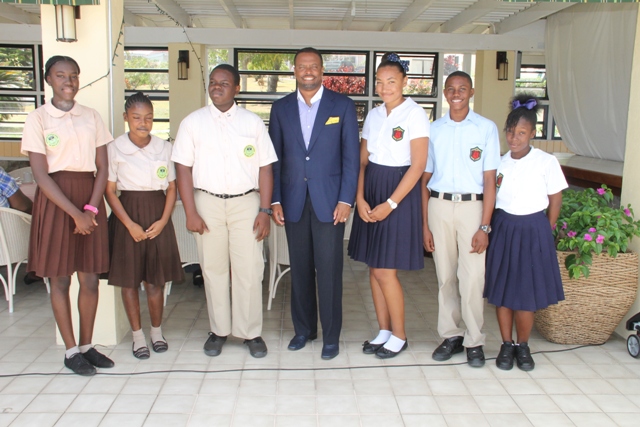 Minister of Tourism and Deputy Premier in the Nevis Island Administration, Hon Mark Brantley at the Mount Nevis Hotel with the participants of the 2014 Bank of Nevis Ltd. Tourism Youth Congress on April 24, 2014
NIA Charlestown Nevis (April 25, 2014) – The Ministry of Tourism introduced six participants from the two public secondary schools on the island, who will take part in the 2014 Bank of Nevis Tourism Youth Congress. The announcement was made during a breakfast hosted by the Ministry of Tourism at the Mount Nevis Hotel on April 24, 2014.
They are Joanne Manners, Veronique Walters and Rol-j Willams of the Gingerland Secondary School and Page James, Cheslin Maloney and Naomi Thompson from the Charlestown Secondary School. The Congress will be held on May 08, 2014, at the Nevis Performing Arts Centre (NEPAC). For which each participant would be required to make a presentation on a designated topic. The winner will be represent Nevis at the next Caribbean Tourism Organization (CTO) State of the Industry Conference slated for St. Thomas USVI.
Minister of Tourism and Deputy Premier in the Nevis Island Administration (NIA), Hon. Mark Brantley who was at the launch, outlined the importance of tourism to Nevis and its significance to the community.
“You may be sitting here and thinking: a student of Charlestown or Gingerland, what does tourism have to do with me? Think about every facet you can consider of human life here on the island and tourism impacts or is impacted by what our people do. I like to say and I know it sounds [like a] cliché at times but I like to say tourism is everybody’s business. It impacts all of us,” he said.
Mr Brantley explained that with the revenue received through tourism contributed to the improvement of the economy on the island.
“Tourism is everybody’s business and it impacts all of us. You know you’re driving on the road sometimes and there are some pot holes and you say ‘why doesn’t the government fix this road?’ You know your area where you live is a little dark and you say, ‘why doesn’t NEVLEC come and put up some lights outside my house?’ Your water isn’t running…you go, ‘why doesn’t the government get more water?’
“All of that costs money. All of that ultimately is impacted by how well we do tourism because tourism, at the end of the day, is our principal economic activity on the island of Nevis. So when the hotels are full, when the taxi drivers are smiling, when the cruise ships are coming, when people are in our hotels and our restaurants and people are spending money, that tax revenue that we derive is what allows us to fix the pot holes and to put up the lights and to ensure that you have water in the taps,” he said. 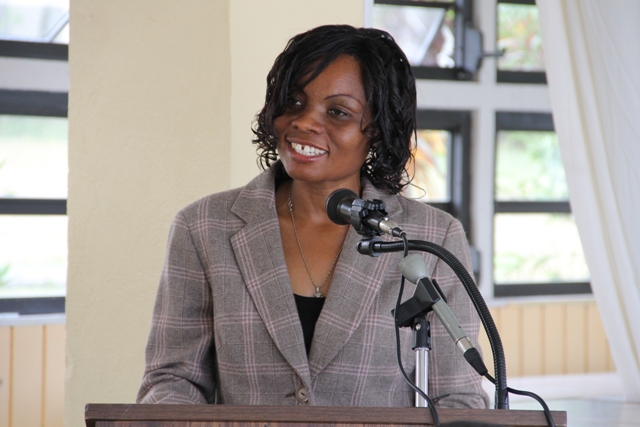 Meantime, Vanessa Webbe Tourism Education Officer in the Ministry of Tourism stated that the Tourism Youth Congress is an initiative from the Caribbean Tourism Organisation (CTO).
She added that the CTO hosted an annual State of the Industry Conference and as a part of the activities of the conference, Junior Ministers of Tourism around the Caribbean participated in a contest and took part in discussions on current events which affected or impacted tourism.
Also present at the ceremony were representative for the Bank of Nevis Ltd. among them Sales and Marketing Manager Bronte Swanston-Hendrickson and Director of Marketing at the Nevis Tourism Authority Devon Liburd.