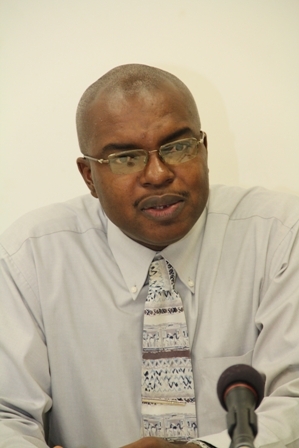 Permanent Secretary in the Ministry of Physical Planning, Natural Resources and Environment Mr. Ernie Stapleton
NIA-CHARLESTOWN NEVIS (February 16, 2012) – The negative effects of illegal sand mining far outweighed any social and economic benefit that practice may have. That was the view expressed by Director of in the Department of Physical Planning, Natural Resources and Environment on Nevis Mrs. Angela Walters-Delpeche at a Sand Mining Symposium on February 15, 2012.

The event was held at the Llewelyn Newton Disaster Management Facility’s conference room at Long Point and drew participants from the public sector on Nevis and St. Kitts and the Nevis Historical and Conservation Society.

Objectives of the Symposium were to identify practical measures to address the sand mining issue; to establish an action plan to respond to sand mining and to make recommendations for the management of Nevis’ through a Sand Mining Policy.

“Sand mining is a global phenomenon. It is the removal of sand from its natural configuration that is used for all kinds of projects and particularly in Nevis, for construction activities. This practise is often destructive and poorly managed [or in some instances unmanaged]. 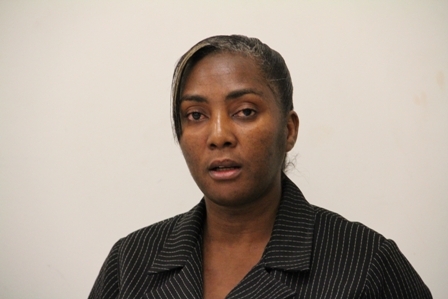 “Although the end results of the use of illegal sand mining may have some social and economical benefits, it can also have environmental problems. Environmental problems occur when the rate of extraction of sand gravel and other materials exceed the rate at which natural processes regenerate these materials,” she said.

The Director pointed to the theft of beach and dune sand as being a direct cause of damage to the environment.  She explained that it caused erosion to the shorelines; damaged the beach fauna and flora, ruined beach aesthetics, was destructive to public and private assets and caused environmental damage to other costal ecosystems associated with the beach such as wetlands.

She also spoke to the transformation of the areas where mining had taken place and destroyed the environment.

“The changes of the mined areas have demonstrated the impact of mining with the ability to destroy the cycle of our ecosystems. The destruction of mangroves and the washing away of artefacts in the Indian Castle area are prime examples.

“This area is the main target for beach sand mining on Nevis. It is an opportune time for Nevisians who boast of sun, sea, sand and natural beauty to understand the severity of this matter and become more conscious of our environment,” she stressed,” she said. 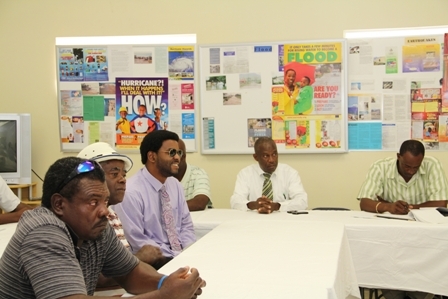 The Physical Planning Natural Resources and Environment Director asked the participants to ponder on the impact on Nevis’ 36square miles of prime land, if each contractor or homebuilder was allowed to take from the beaches in Nevis the required amount of sand for their construction projects.

She used the opportunity to ask buyers of sand to take a second look at the available alternatives, though it may be more costly to purchase sand from legitimate businesses who had permission to import sand but said the sacrifice would be worthwhile to the environment and less costly for all in the long run.

Another major impact of beach sand mining according to Mrs. Walters-Delpeche, was the loss of protection from storm surges which were associated with hurricanes, tropical waves and tropical depressions. 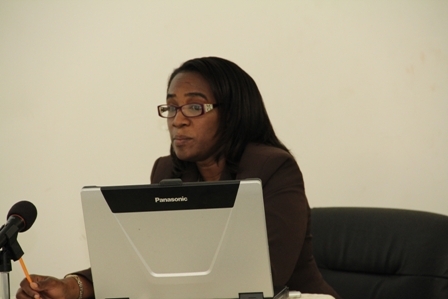 “Sometimes it is difficult to tell that a beach has been mined as sand extraction becomes difficult to recognise when the beaches re adjust to a new profile after a few storms but historic accounts of beaches in the Caribbean often reveal that our beaches have narrowed considerably over time.

“Mining is particularly unprofitable in a time of rising sea level when the sand is greatly needed as a storm energy buffer,” she explained.

Notwithstanding, Mrs. Walters-Delpeche had a suggestion for members of the public who needed an alternative to beach sand and listed quarry sand as one available which was better than beach sand at the moment.
Therefore, she urged quarry operators to ensure the necessary tests were done so that their product could be just as beneficial as beach sand to all.

The Director said Nevis was heavily dependent on tourism and if the public wanted to mine away one of the major components of the sun, sea and sand formula, it would become detrimental to the island’s economy and have a negative multiplier effect on the community including social problems. 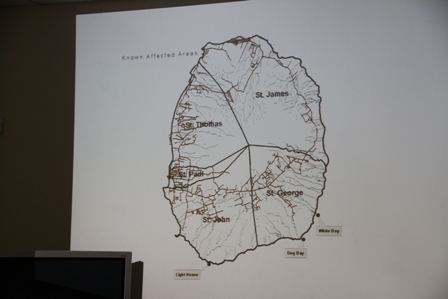 “We therefore solicit the assistance of the community at large to report any incidence of sand mining on our beaches. It’s time to save our beaches and save our economy,” she urged.

Other remarks also came from Permanent Secretary in the Ministry of Physical Planning, Natural Resources and Environment Mr. Ernie Stapleton and Environmental Officer in the Department Ms. Claudia Walwyn.