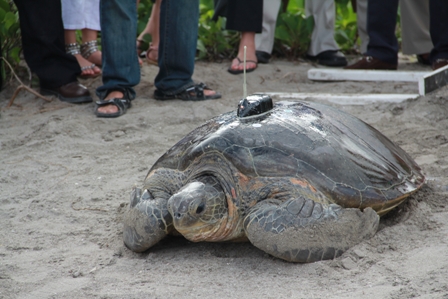 Three hundred and fifth pound Neve, the first Green sea turtle tagged by Sea Turtle conservationists on Nevis making her way back to the Caribbean Sea near the Four Seasons pier with her newly attached satellite transmitter
NIA CHARLESTOWN NEVIS (JULY 25, 2012) — Wildlife conservationists, guests and staff of the Four Seasons Resort, Nevis looked on and cheered on Neve, a 350-pound Green sea turtle as she made her way back to the Caribbean Sea on July 23rd 2012, tagged with a satellite transmitter to track of her future travels.

She made history as the first Green sea turtle of 11 to be tagged and released by the Nevis Turtle Group in collaboration with the Sea Turtle Conservancy and the Resort since turtle monitoring began on Nevis in 2006. President of the Nevis Turtle Group Mr. Lemuel Pemberton in a brief interview with the Department of Information moments after Neve swarm away from the island’s shoreline outside of the Resort’s pier gave a brief insight into the monitoring programme on Nevis.

“Her name is Neve which I think is the Italian word for Nevis. This is the first time that a Green sea turtle is being tagged on the island of Nevis with a satellite transmitter. Previously we have had Hawksbill and we have tagged in total of 10 Hawksbill sea turtles on Nevis. 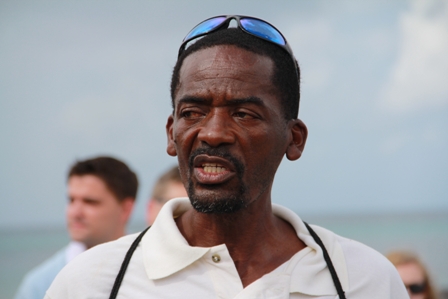 According to Mr. Pemberton, the satellite transmitters in the past had assisted with them to follow the migratory patterns of the Hawksbill turtles. However, they now had the opportunity to learn more about that of the Green turtle.

Meantime, Executive Director of the Sea Turtle Conservancy based in Miami Mr. David Godfrey in brief remarks prior to the release of the Green spoke to the work of his organisation based in Miami. 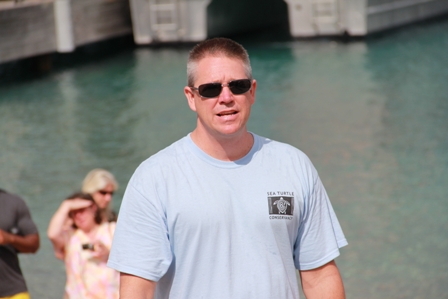 “We do sea turtle research and conservation all over the Caribbean and over almost the last decade, we have had a fantastic relationship with the Four Seasons and the Nevis Turtle Group to help learn about where the turtles go when they leave this island because very few of them nest here and then stay here.

“They travel to far off places and one of the things we try to do is learn where they go, where they live when they are away from the beach, so we can do our best to track them at all times because they are really only here for a short period of time. So the research is very important for that reason,” he said.

Mr. Godfrey also pointed to a related education awareness programme Tour of the Turtles that was established to monitor the tagged turtles which could be tracked on the information highway. 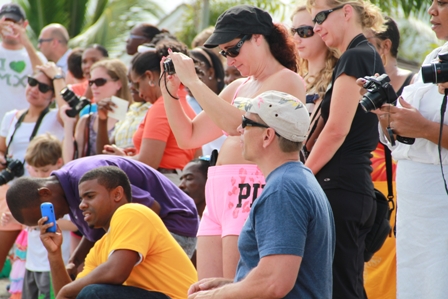 “We have also developed a fun education programme so all of you can watch along with us as we learn where these turtles go. The Tour of the Turtles is a fun programme it tracks these turtles as well as many others that we track around the Caribbean and in Florida.

“You can log on [to http://www.conserveturtles.org/] for free and watch Neve and Penny [name given to turtle tagged one day before] from yesterday and a number of other turtles and adopt them if you want to support sea turtle conservation,” he said.