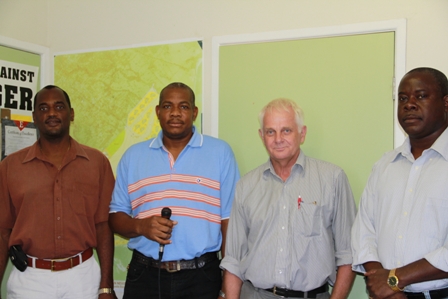 Mr. Hector’s comment came in an interview with the Department of Information on July 26th, 2012, at the end of a meeting to formulate an action plan at Prospect with EU Consultant in Tropical Aquaculture from the African Caribbean Pacific (ACP) Fish 2 programme Mr. Niels Svennevig, St. Kitts Fisheries Officer Mr. Sam Heyliger and Permanent Secretary in the Nevis Ministry of Agriculture Dr. Kelvin Daly.

“I want to thank the EU for seeing this project as one in the ACP States as an important project and we welcome such projects, as we realise they are so important to the development of the Fisheries Sector in this Federation…

“The Fisheries Sector, we know, contributes almost two percent to the Gross Domestic Product, very important to the development of this Federation. A lot of work has been done before and a lot of it in the experimental stage and this action plan, this strategy would provide a roadmap for us as we go forward in this sector,” he said.

The Minister described the discussions as “healthy” and expressed the view that it provided pertinent information as they developed a strategy for the planned aquaculture project moving forward.

Meantime, Mr. Svennevig in brief remarks noted that his two day visit and meeting with top agriculture officials on Nevis, served to look at the possibilities for the islands to enter the realm of aquaculture.  He also spoke to the extent of the proposed project.

“The scope of the project funded by the European Union is to make a strategy for development of aquaculture or fish farming in the Federation. Already we had been discussing several options and hopefully, they will be able to produce fish, mainly marine fish for the islands.

“There are several local species which are very promising in fish farming. So we are now to see which kind of actions need to be taken and based on that make a strategy and have it endorsed by the stakeholders on the island. In the start of September, there will be a final workshop for the final endorsement of the strategy and the action plans,” he explained.

The Consultant also added that discussions were specific to suggestions related to pilot farms, with the possible combination of a land based fish from the juvenile production and another production of consumption size fish in the sea.