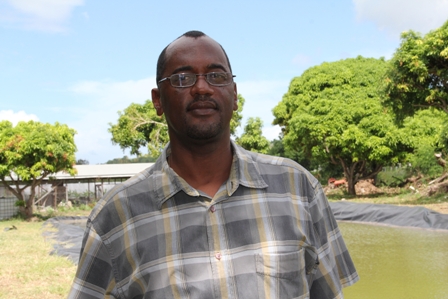 NIA CHARLESTOWN NEVIS (November 20, 2012) — Permanent Secretary in the Ministry of Agriculture on Nevis Dr. Kelvin Daly has expressed satisfaction with progress made with the fish farming pilot project at the Government owned farm at Prospect.

The top Agriculture Official told the Department of Information in a recent update, the project had advanced in the area of excavation and the installation of pond liner about two months ago and had taken two days to full. Since then the pond had been stocked with between 1500-1600 young tilapia from the reservoirs at Spring Hill and the Cotton Ground ponds, about half an ounce to ounce in weight.

The fish receive two daily feedings which has been documented so at the end of the programme the cost of production of one pound of fish could be determined.

Meantime, Dr. Daly reiterated that the pilot project was the Ministry and Department of Agriculture’s intervention in aquaculture on Nevis to ensure that the availability of fish protein did not become a problem for the island in the near future.

“I think we are one of the last in the region to invest in aquaculture programmes. It’s big in Jamaica and Trinidad and the Windward Islands. Dominica of course has natural rivers and lakes so they have a natural system. We have to invest in manmade systems to afford this kind of technology but it is critical on several fronts.

“The first front of course, is trying to make sure that we have affordable fish protein for Nevisians to eat. Right now if you look at the price of pot fish, the prices have been going up dramatically over the years. Some of it is because of external forces gasoline and fuel prices, operating cost, supplies etc. has been going up,” he said.

He referred to the fish ponds as static systems with significantly lower investment. Once the pond was stocked it translated to minimal management and therefore fish produced from that type of programme would be cheaper to produce and purchase.

Dr. Daly linked the second reason for the project to the reduction of pressure being faced by the near shore fisheries and the third for a reduction in importation.

“We have an awful lot of fishermen out there who are going out on the near shore areas traditionally and we are trying to ease some of the pressure by offering an alternative source of fish protein. The third of course is to reduce the importation of fish, especially tilapia coming all the way from Vietnam and China,” he said.

According to Dr. Daly, the Ministry had the capacity to adequately produce quality and safer fish on Nevis and as such the pilot project would also assist with import substitution as well.

“This programme here is about import substitution also. I think last year we imported close to US$175,000 worth of fish. I think we can save that money right here on Nevis by doing it ourselves and so we launched this pilot project to show persons on Nevis exactly how simple it is.

“This is a large scale project even if it is a pilot project but the technology is transferrable to small ponds, raceways and even tanks in your back yard or in your garage to make it work and it gives you the opportunity to eat more fish,” he said. 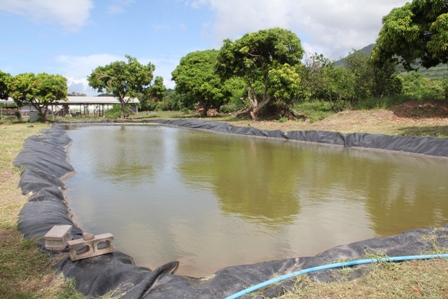 Dr. Daly said it was hoped that families with young children who needed fish protein in their diet would look at that technology and start up small projects in their backyards.

Notwithstanding, he said he also hoped that in the future they would receive outside assistance from friendly agencies to expand the project.

“What we are hoping for in the future of course, with the Taiwanese help is to establish a small hatchery for persons on Nevis or even St. Kitts to source fingerlings so you don’t have to go to the ponds and capture them out of the natural environment.

“It would be easier for us to manage the programme with a hatchery and therefore we are hoping to get that started in the new year with the help of the Taiwanese Mission in Cades Bay,” he said adding that they continued to be excited about the project and expected more farmers would come forward to be a part of the project next year.