General Manager of the Nevis Air and Seaports Authority Mr. Spencer Hanley
NIA-CHARLESTOWN NEVIS (October 07, 2011) — The Nevis Air and Sea Ports Authority moved to better its finances with the installation of US$73,000 of aviation refuelling equipment at the Airport in Newcastle on Friday October 07, 2011. The 8,000 gallon AV-Gas tank purchased from the United States of America will be used to satisfy the demand for the fuel from the roughly 112 piston aircraft which call monthly at the Airport.

General Manager of NASPA Mr. Spencer Hanley, who was on hand at the installation of the equipment which arrived on Nevis three weeks ago, told the Department of Information the reason behind the investment.

“We have estimated the returns to be roughly in the vicinity of US$12,000 per month. So we believe that with cost and everything we should make our money back within 12 months time and going forward it is an important factor for us…

“Av-gas is used in piston engine airplanes and it is a way for us to boost our revenue here at the airport in Nevis. We have on average 112 piston engine aircraft flights that comes here every single month and those are the types of aircraft that take that type of fuel,” he said.

Mr. Hanley further explained that there had been an expressed interest for the availability of the AV-Gas fuel. 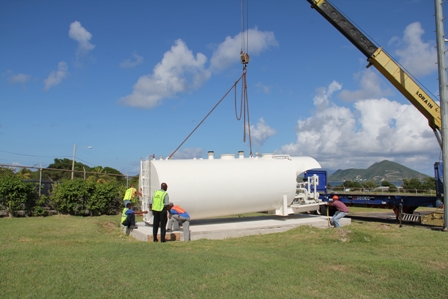 “We constantly get inquiries both by telephone and online of aircrafts and air carriers, inquiring whether or not we have AV-gas. It was because of that we were prompted to move into this direction because around here, I don’t think it is sold in St. Kitts either and I think the nearest place to Nevis where you can get Av-Gas is St. Maarten. So Nevis again is taking the lead forward in an effort to boost its tourism product and to move things forward…

“There are two types of aviation fuel – Jet A and AV-gas. This tank is for AV-gas and so with that in mind we thought we should venture into this area,” he said.

Mr. Hanley hinted that the availability of the new fuel would be welcome news for piston engine aircraft already utilising the airport.

“In the past the piston engine aircraft have always had to get fuel elsewhere. Take the one from St. Croix, Costal Air [with] Mike Foster, we all know Mike and that is one of those types of aircraft.

“He would then fuel up in St. Croix probably carrying less weight into Nevis because he knows he has to make the round trip on the same tank of fuel. Now with this he may be able to take a little more load and just purchase his fuel here in Nevis,” he said.

According to the NASPA GM, the new investment would also complement the availability of Jet A1 fuel already being offered at Newcastle Airport, adding that it would be a profitable venture for the Authority. 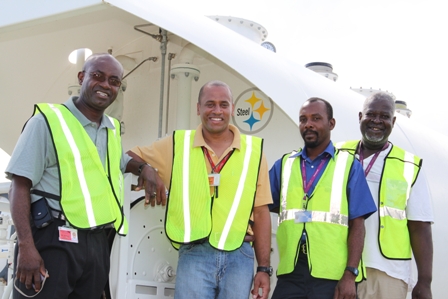 “Sale of the fuel is always profitable. It’s just that we don’t have as much traffic as we use to have. For example American Eagle the type of fuel that they take is the Jet A fuel and they use to purchase from us here. They have suspended their operations to Nevis at this time but we still have Liat and Winair and some of the other private aircrafts that take Jet A fuel.

“So what we have established here is a situation whereby regardless of which type of aircraft you have or what type of fuel your aircraft takes we have the capacity and the availability to provide fuel for you,” he noted.

The tank was purchased by NASPA over a period of 16 monthly payments with the last payment made in September 2011. Mr. Hanley said the tank though had the capability to hold 8,000 gallons, it would be used to facilitate up to 6,000 gallons which would allow for any expansion of the contained fuel.

Meantime Mr. Hanley disclosed that two new airlines would soon be providing air access to Nevis. Cape Air and Air Sunshine both piston engine aircrafts would join other like aircraft who used the Airport.

“There are two airlines that are due to come on stream here very soon. The first one is called Cape Air and they are due to begin operations here on November 11th, connecting Nevis with San Juan once daily to begin with.

“Then on December 1st another small airline called Air Sunshine and they are expected to connect Nevis with San Juan via St. Thomas Virgin Islands and they will do a four day operation here,” he said.

He also expressed the view that the new additions would be attractive to locals particularly those which offered daily flights. He said it would afford them an opportunity for short shopping, business and pleasure trips to the islands they served.