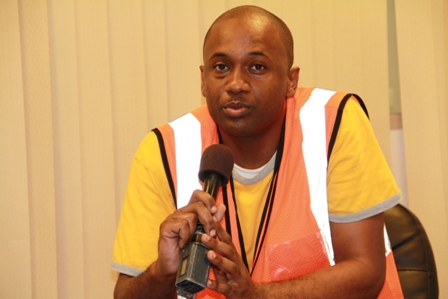 Fire Sub Officer attached to the Newcastle Fire Station and Fire and Rescue Executive Coordinator in the St. Kitts and Nevis Fire and Rescue Services Mr. Adbias Samuel who masterminded the simulation exercise at the Airport in Newcastle
NIA CHARLESTOWN NEVIS (JUNE 26, 2012) — The Emergency Plan at the Vance Amory International Airport in Newcastle was tested with a full scale hostage situation and a simultaneous plane crash on June 19, 2012. Operations there came to a halt for just over three hours that morning but according to a top official who masterminded the operation, it was well worth the effort.

In an interview with Fire Sub Officer attached to the Newcastle Fire Station and Fire and Rescue Executive Coordinator in the St. Kitts and Nevis Fire and Rescue Services Mr. Adbias Samuel, told the Department of Information the traumatic experience from 8:45 to 11am for many of the workers there, involved real guns and soldiers but was an unexpected drill which tested the capabilities of the stake holders within the Airport. In his estimation, the simulation was successful.

Mr. Samuel who was also the script writer and exercise coordinator explained that the objective of the full scale exercise was met but stressed that at no time during the near three hour “ordeal” for some, was the safety of anyone compromised or property in any form was endangered.

He also spoke to the specifics of the exercise in their attempt to test the Airport’s present Emergency Plan.

“The first script was the plane crash. Within the plane crash the Emergency Plan would involve stake holders such as the airlines representative, it would have involved the air traffic control, fire department, the management of the airport as well as the police department, health services all those stakeholders would have a role to play in that situation.

“There was the simultaneous inject of the soldiers from St. Kitts who were used with real M16s with absolutely no live rounds. They were controlled by an inspector of the police force at all times to ensure the safety and security of everyone involved remembering it was just a drill. They did an excellent job in acting out their role as terrorists,” he said.

The Senior Fire Officer spoke to another part of the script which dealt with the hostage situation.

“The script was they would have jumped over the picket fence, run into the open area or the greeting area as may want to call it, on the land side of the airport. Out of the six [soldiers] three took over the Arrival area and three took over the Departure area. So we would have tested Customs and Immigration also we tested Security, the Airlines and probably any civilians that may have been around,” he said.

According to Mr. Samuel, the element of surprise was satisfactorily met since no one expected what took place.

He also pointed to the thinking in the Caribbean that hostage situations would not happen but it should not be.

“There is a mentality or a culture with us in the Caribbean that such things would not happen to us and it is therefore relevant for us to put measures in place or to see where our weaknesses are in dealing with incidents like this, so that we can prepare and in time, if something does happen, we have the proper mechanisms in place and the proper response, the proper everything to somewhat minimise any unwanted situations,” he said.

The Officer described the situation during the exercise as traumatic but the intention was to make the experience as close as possible to a real situation.

“It was traumatic somewhat to see trained soldiers, trained to kill so to speak come at you with M16s in a very aggressive manner like a terrorist would because they are trained just as much as soldiers or even better sometimes and just jump at you like that. 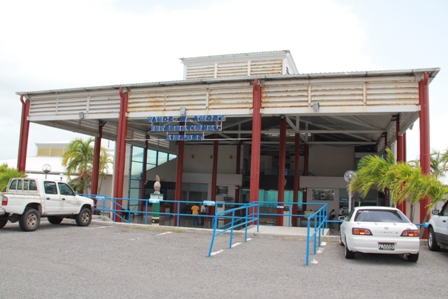 “Initially, it sends a real shock through your system through your body and that’s what we wanted to do, to make it as realistic as possible so that persons will understand this is something that can happen. We are hoping that it will never happen but it can happen so that’s what we wanted to do to prepare for the worst case scenario in the event that it does happen,” he explained.

Notwithstanding, Mr. Samuel noted that simulations took several forms in the Caribbean but was uncommon to think of a hostage situation.

“Normally in these exercises yes we have a plane crash, we have two vehicles collide, we have a fire in the terminal or we have some kind of chemical hazard in the area but to actually have six gunmen rush your airport, take it over, close it down and hold you at gunpoint is a terrifying experience. So we wanted to bring it home as close as possible and I think the job was done,” he said.