The announcement came from the establishment’s General Manager Ms. Doretta Danie, at a ceremony to herald in the first exposition held at the Craft House grounds, Pinneys Industrial Site on Thursday May 31, 2012. She said the move, like the Expo, would afford the public greater access to their line of products.

“We anticipate that this first annual Craft Exposition will provide opportunities for us as well as our local entrepreneurs to access and penetrate not only the local market but external ones as well. In this regard, we have added a Marketing and Sales officer whose responsibility includes the highlighting and promotion of our locally produced craft [and to] create avenues that will be of benefit to our private sector and craft makers as well. 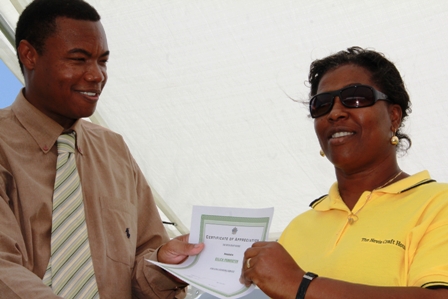 “I know that the public is aware, that I was charged with the mandate of putting the Craft House on the internet. I daresay to you Minister Cozier, that come June 25th, you and the public may log into www.neviscrafthouse.com ,” she said.

Ms. Daniel noted that apart from increasing their marketing opportunities, the one-day Expo was also intended to recognise the capability of their craft artisans, 17 of whom were honoured at the ceremony.

“It is also important that we not only recognise and appreciate their skills but afford them the ability to expose their natural talents and God given gifts to the Nevisian public, as well as the wider region and international consumer market,” she said.

The Manager reminded those present, that the Craft House opened its doors in March 1980 with a compliment of seven employees, two of whom were still employed there. 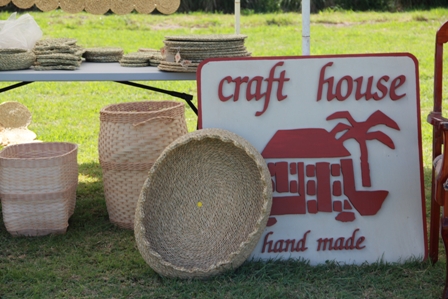 The staff compliment has since grown to 23 employees. They have been organised into various departments to produce woodwork, rattan, grass and other handicraft products.
She said the Craft House was established then to showcase the extent and ability of the Nevis handicraft artists and it remained the same in 2012.

The 17 awards were presented by Minister of Trade Hon. Dwight Cozier in four categories. For Regularity and Punctuality Mendeli Williams, Antonio Parris and Dawn Warner were recognised, while Lalanie Rogers, Alicia Wilkinson and Lorraine Jeffers were awarded for their Dedication.