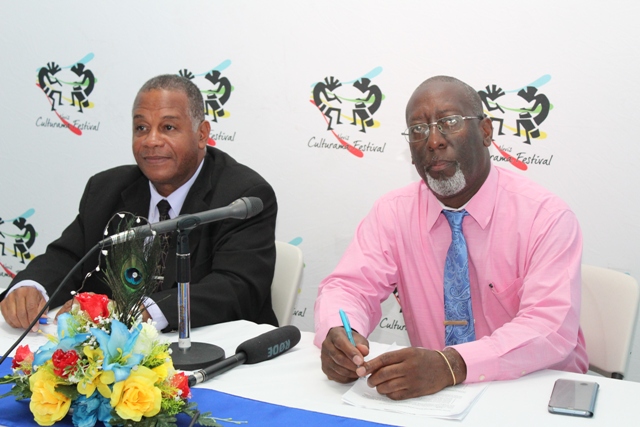 (L-R) Hon. Eric Evelyn, Minister of Culture in the Nevis Island Administration; and Mr. Abonaty Liburd, Executive Director of the Culturama Secretariat and Chairman of the Nevis Culturama 44 at a press conference at the Cultural Village on September 06, 2018

NIA CHARLESTOWN NEVIS (September 06, 2018) — Culturama 44 on Nevis, the island’s leading cultural festival was a success and exceeded expectations. As the preliminary financial statement made public is indicating, the Wet Fete event raked in the most revenue for the season with a 95 percent increase over last year’s staging.

Hon. Eric Evelyn, Minister of Culture on Nevis, made the announcement while reporting on the summer cultural festival at a press conference at the Cultural Village on September 06, 2018.  He made specific reference to the preliminary financial statement he made public regarding the 2018 festival.

“As indicated from the figures above, the Wet Fete activity is the largest contributory event to the earnings for the 2018 festival, and represents 41 percent of the gate receipts/tickets sales. It is noteworthy that there is a 95 percent increase over last year’s earnings from the Wet Fete,” he said.

Mr. Evelyn added that revenue from rentals and vending activities totalled $36,800, a decline of $3,425 over collections for 2017, representing a 9 percent decrease.

However, there was an increase in the revenue collected for booths at the Cultural Village, which was attributed to an increase in rental that was implemented by the Nevis Island Administration (NIA) earlier this year, through the Ministry of Culture.

Also in the area of revenue, there was a reduction of 61 percent from receipts for booths allocated at the annual Food Fair. The $8,425 decline was attributed to a smaller number of booths allowed, as a control mechanism implemented to reduce the number of booths at the event.

Mr. Evelyn stated that in the area of financial sponsorship for the festival, the NIA’s subvention of $300,000 remained the same as last year and so was FLOW’s financial contribution of $80,000. Other sponsorship contributions showed an approximate 12 percent interim increase.

In the area of expenditure, particularly the prizes awarded to winners of the various contests, the Culture Minister noted that $256,000 was paid out, representing approximately a 3 percent increase of $8,450, over that of 2017.

Mr. Evelyn stated that all vendors will be paid in keeping with the Culturama Secretariat’s policy but for the time being, winners of the various contests were paid first while others would receive payment over time in a timely manner.

The Culture Minister was accompanied by Mr. Abonaty Liburd, Executive Director of the Culturama Secretariat and Chairman of the Nevis Culturama 44.