The event attended by 100s of teachers from schools across the island, was theme “Advancing Education by Fostering a Culture of Collaboration”. The theme would also be used to drive the Department’s activities for the school year 2012-2013.

Mrs. Queeley-Connor said with an 87 percent success rate in achieving its overall goals for the past year, there was no doubt that the bar had been set extremely high for those who decided to continue in the noble profession of teaching on Nevis.

“As we embark on a new school year filed with hope and opportunity, we can be proud of our accomplishments but even more importantly, we must set new and higher standards for the year ahead.

“The NIA’s demands for educators to be outstanding in performance and to generate an increase in output, continues to come with the Ministry of Education’s full support and commitment to create the environment for that success. Our expectations for excellence remain high,” she said.

The Permanent Secretary explained that it was the intention of the Ministry to continue to uphold the values of the society through contributions to the development of people with respect for the general conventions of society.

“We want to educate children who are sensitised to the needs of others and who know how to balance self interest with justice and compassion.

“As we work with other agents of society to advance our cause therefore, you must forge ahead with an obligation to offer the highest quality of service possible. A quality that comes as Willa A. Foster puts it, as the result of high intentions, sincere effort, intelligent direction and skilful execution,” she said.

The top Education Official on Nevis also spoke of recent strides made in the area of education and announced that Mr. Orette Smith, a teacher at the Charlestown Secondary School, was in Columbia attending a Technical Vocational Education and Training (TVET) workshop.

She also added that the Ministry had embarked on the United Nations Children’s Fund (UNICEF) Initiative for Child Friendly Schools which she explained, would be infused into the Character Education Programme for the 2012-2013 school year.

Meantime, Mrs. Queeley-Connor used the opportunity to honour the contributions of colleagues who were either leaving the profession through retirement, to pursue advanced studies elsewhere or for other important reasons. She thanked and wished them well and acknowledged their accomplishments.

However, to those who were entering the profession, the Permanent Secretary welcomed them and disclosed that over 20 young persons who had attended the Department’s Prospective Teachers Course had been employed.

She also recognised eight teachers who had left two years before to pursue studies at the Clarence Fitzroy Bryant College (CFBC) Teacher’s College and had returned to teach.

Notwithstanding, Mrs. Queeley-Connor encouraged all teachers who would be entering the class rooms at the start of the new school year, to be vigilant. She also advised them to say what the meant and mean what they said when they taught the children. 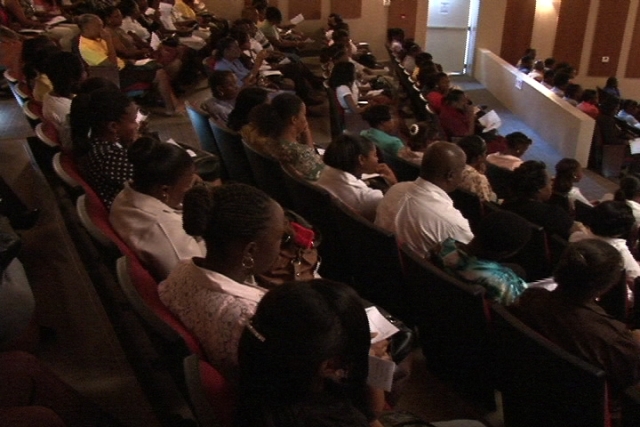 In conclusion, the Permanent Secretary urged the teachers to be positive role models. She cited that while the foundations of education remained the same, the old adage of do as I say and not as I do, had lost all its significance.

“Twenty-first century teachers should not only be positive role models but excellent trend setters.

“Let us now commit ourselves to our new thrust and mission to maximise resources and increase accountability in order to provide the residents of Nevis with a quality and relevant education system. Built upon strategic planning, research and evaluation, education and training and school community partnerships,” she said.