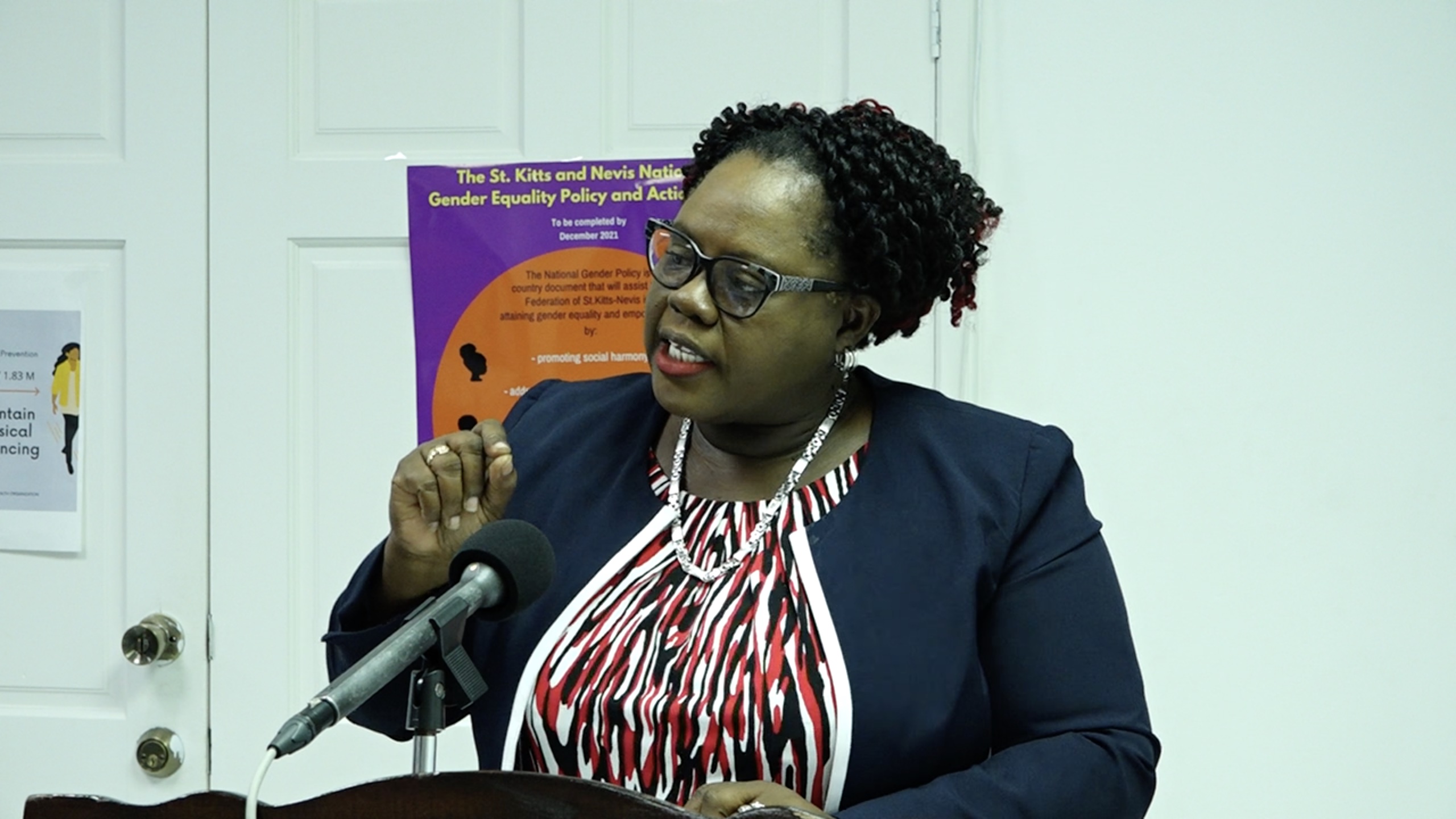 NIA CHARLESTOWN NEVIS (November 18, 2021) — Hon. Hazel Brandy-Williams, Junior Minister of Gender Affairs, could hardly contain her excitement as she launched a Boys’ Mentorship Programme on Nevis hosted by the Department of Gender Affairs.

The programme began with 15 men in the first in a series of training sessions following a ceremony to launch the programme on November 16, 2021 at the Department of Gender Affairs conference room. During her remarks, Minister Brandy-Williams endorsed and expressed satisfaction with the programme.

“I am indeed happy to know that we in Nevis have taken that bold step, starting a mentorship programme for boys. It’s something that has been in the making for a while but today demonstrates that we’re indeed very serious about making this thing happen…

“I am happy that we have come to this point and I want to say congratulations to those of you who would have stepped forward,” she said.

The minister spoke of the significance and far-reaching implications of mentorship, and the programme’s importance to Nevis.

“Mentorship is something that we all need and indeed we experience it in our lives. I am certain that all of you who are sitting here could name at least one person who would have mentored you, who would have given you some level of encouragement in whatever project you have done over the years…

“For some of us the influences have led us to become technicians, skilled persons, sports gurus, sports enthusiasts and things like that, and others have had different experiences and we all know. We see what is going on in our communities today, and those differing experiences have led some to unsociable behaviour, and that is the kind of behaviour we need to stamp out of our communities. Hence why we have seen it fitting to start this very important programme in Nevis,” she said.

Mrs. Brandy-Williams noted the importance of having positive role models and thanked the men who answered the department’s call to commit to becoming mentors to the boys of Nevis while encouraging others to join them.

“I want to thank those of you who are here today, who have stepped forward, who have raised your hands and you have said to yourself ‘I want to make that commitment towards helping our boys,’ and it is because I believe, someone would have helped you along the way.

“I want you to encourage other young men who have something to offer, something positive, to our boys and say ‘Let us be a part of this group.’ You know why? Because mentorship cannot operate in a vacuum. It has to be an ‘all hands on deck’ approach and so it involves the schools, the churches, the families, the homes and most importantly the community. We must have the community buy-in for this to work,” she stated.

The Junior Minister of Gender Affairs used the opportunity to thank counterparts in St. Kitts for lending their assistance.  She also commended Mr. Dion Browne, Gender Field Officer in the Ministry of Social Development and Gender Affairs on St. Kitts, who is one of the facilitators.

“Mr. Browne said as well it is not going to be an easy task, yes, because we are all busy people juggling work, family life, and other things but we must remember that somebody years ago made that sacrifice and that commitment to mentor you, and so what you are doing is giving back. So I must applaud you who would have stepped forward to assist us.

“I also want to thank our counterparts in St. Kitts. They established their mentorship programme in 2016 and so far, they have been very successful. They have now come to help us to set up our mentorship programme and I am hoping from that collaboration we too will see some level of success with our programme,” she said.

Apart from mentoring boys, Mrs. Brandy-Williams, who is also an advocate for gender equality, said the programme would fulfill the Sustainable Development Goal 5: Gender Equality. She dispelled the myth that the matter of gender equality is only about women, noting that the topic would be addressed during the training sessions.

“Women are not here to fight with men. We are here to operate alongside men so that there can be a balance, a good balance and when we have that balance that is when situations in our communities could only get better. We have to understand that half of the world, 50 percent of the world is women, and once we have a balance, things would be so much better,” she said.

Among those present at the ceremony were Ms. Latoya Jeffers, Assistant Secretary in the Ministry of Health and Gender Affairs who delivered the Vote of Thanks; and Mr. Mario Phillip, Gender Affairs Officer and coordinator of the programme. He chaired the ceremony.