The Nevis Island Administration in conjunction with the Nevis Philatelic Bureau will issue a five dollar stamp on September 19, 2008, to commemorate the Nation’s Silver Jubilee celebration.

The Postal Authority said stamp depicts the first steam jetted from the first geothermal reservoir on June 01, 2008, at Nevis Site 1, Spring Hill in the Parish of St. Thomas, which signaled a significant milestone and development in the ongoing geothermal exploration programme on Nevis.

“The people of Nevis now look towards the production of cheap, clean and renewable geothermal electricity for the betterment of life for all as it celebrates the 25th Anniversary of Independence,” the Authority said one day ahead of the issue.

In an effort to reduce the cost of living, further diversify and develop the economy on Nevis, the
A First Day Cover issue of a $5 stamp to commemorate the Nation’s Silver Jubilee celebration
NIA had granted an Exploration License to West Indies power, Nevis Ltd. to explore for geothermal energy in January 2007. 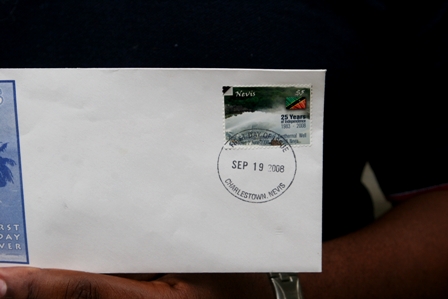