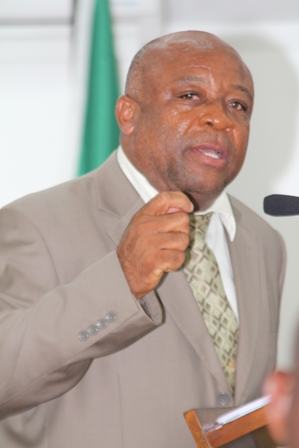 Deputy Premier of Nevis Hon. Hensley Daniel while he seconded an amendment to the Nevis Investment Promotion Agency Ordinance (No. 2 of 2008), at a sitting of the Nevis Island Assembly on Monday

NIA-CHARLESTOWN NEVIS (October 12, 2011) — Deputy Premier of Nevis Hon. Hensley Daniel, described an amendment to the Nevis Investment Promotion Agency (NIPA) Ordinance which now allows for the appointment of a Chairman of the Board and an Executive Director for the Agency, as a signal that the sitting Nevis Island Administration (NIA) was not monopolising power and authority but instead was willing to give persons in the community a chance to bring their ideas to the fore.

Mr. Daniel’s statement came when he seconded the Bill to the legislation brought before the Nevis Island Assembly on Monday, by Premier of Nevis and Minister of Finance Hon. Joseph Parry.

He cited that the new legislation was good for Nevis and explained that prior to the amendment the NIPA chairman had to come from Cabinet, a relationship he deemed as incestuous.

“What we have sought to do is to ensure that this amendment falls in line with the policy directions of the NRP Government. We were here just short of two years ago making another amendment to the Solid Waste Management Authority where the Permanent Secretary of Health was the Chairperson of the Authority.

“We thought that was an incestuous relationship because the Permanent Secretary should really be monitoring what is happening in all the aspects. So here we come again with this amendment to remove politicians from the process to give other citizens the chance and it allows for also a greater engagement of ideas,” he said.

The Deputy Premier noted that the amendment suggested by Ministers of Government that they had to invest greater confidence in the people of Nevis and give them a chance to put their ideas and training to work for the benefit of the entire population.

“Politicians are not repositories of knowledge, we must simply facilitate the engagement and involvement of a wide cross section of persons and I am certain that the Nevis public will agree with me, that there are several other persons in our midst, in the community at large who can rise to the occasion and chair the Nevis Investment Promotion Agency,” he said.

According to Mr. Daniel, the NIPA played a pivotal role to help Nevis move forward and improve the island’s level of competitiveness, now that the Minister was no longer directly responsible for the implementation of the Agency’s programmes.

“The World Bank Study on Doing Business in the Caribbean puts us [Nevis] way down the ladder and that we need to be able to climb up and move forward. We believe if we give the opportunity to someone else from the private sector or public sector, we can move quickly to move through the bureaucratic maze that investors have to go through in order to set up business.

“It will help us [Nevis] to become more competitive and we will certainly get a wider cross section of ideas. If we are to improve our competitive edge, we have to move expeditiously to avoid the direct engagement of the Minister. In a way, it is an attempt at the devolution of authority,” he said.

He expressed hope that the new move would bring a greater level of confidence or interest to investors, since investors were getting increasingly weary, in some countries, of having to deal directly or all the time with ministers of government and would allow for greater ease.

“So we believe with this amendment we will allow for greater ease and certainly, since in politics, perception is the only truth, people will perceive that the Agency can function without the direct engagement of the Ministers on a day to day basis,” he said.