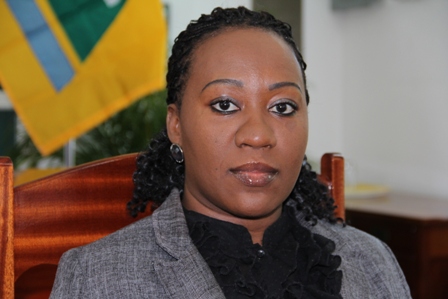 Clerk of the Nevis Island Assembly Ms. Shemica Maloney (file photo)
NIA CHARLESTOWN NEVIS (December 12, 2013) — Premier of Nevis and Minister of Finance in the Nevis Island Administration (NIA)  Hon. Vance Amory, will present his 2014 Budget Address at a sitting of the Nevis Island Assembly on December 18, 2013, at Hamilton House from 10 a.m.
That information was relayed by Clerk of the Assembly Ms. Shemica Maloney, through a letter dated December 06, 2013. It also stated that the relevant papers would be circulated shortly.
The sitting will mark the second Budget Address presented by the Concerned Citizens Movement (CCM)-led NIA, since it took office late January of this year.
The first Budget was presented by Mr. Amory in April 2013, since a budget had not been presented in December 2012 by the former Administration, for the budgetary period 2013.