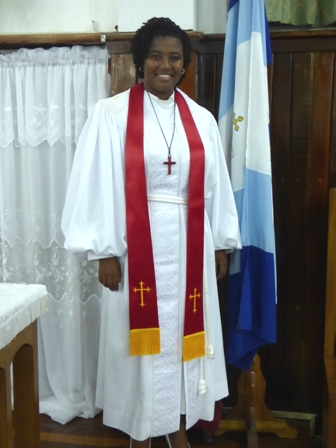 Rev Amica Liburd 12 12 2013
NIA CHARLESTOWN NEVIS (December 12, 2013) — Minister responsible for Social Development, Youth, Sports and Gender Affairs on Nevis Hon. Hazel Brandy-Williams admonished the youth of Nevis to follow the example of Ms. Amica Liburd, a Gingerland lass who was ordained a Methodist Minister of Religion in Guyana, on Sunday December 08, 2013.
Mrs. Brandy-Williams made the call when she delivered a congratulatory message to Reverend Liburd recently, ahead of the ordination ceremony.
“Reverend Liburd is much more than someone with a sound intellectual capacity. Reverend Liburd is known to be a paradigm of virtues.  Throughout her student career and work career, she has always conducted herself in an exemplary manner.  She is an excellent role model, someone I would admonish the youth to emulate,” she said.
According to Mrs. Brandy-Williams, the newly ordained Minister had made a bold and courageous decision to dedicate her life to the service of the Lord and had chosen a career path in a field that was dominated by men and noted that the ordination was one of which all of Nevis should be proud.
“As Minister responsible for Social Development, Youth, Sports and Gender Affairs, I wish to extend to Reverend Liburd heart-felt congratulations on behalf of the entire Ministry and by extension the Nevis Island Administration (NIA). 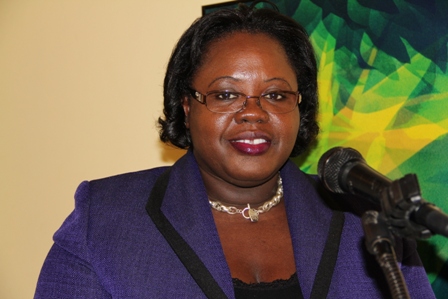 “This ordination is a positive development for which we should all be proud.  I wish to commend her family, friends and colleagues who supported her in this endeavour.  I wish Reverend Liburd a fruitful career in the service of the Lord and a productive future,” she said.
The Minister noted that Ms. Liburd had ventured into a number of fields before she made her decision to become a Minister of Religion and listed the areas which eventually culminated with an answer to the call to serve the Lord.
“Ms. Liburd embarked on a career as an Meteorologist at the Vance Amory International Airport (VAIA).  While there, she took up an offer to travel to Trinidad and pursued a nine-month training programme as an Air Traffic Controller before returning to the VAIA to work. 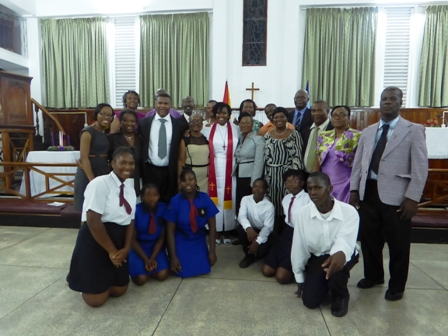 “During her tenure as a student at the Sixth Form, Ms. Liburd trained at the Government’s Department of Information as a part-time News Anchor for the Nevis News Cast (NNC), a programme of the Nevis Television-Channel 8.  This continued while she was gainfully employed at the VAIA as a Meteorologist.
“Although, Ms. Liburd tried different fields of endeavour, she felt a strong urge that there was something else that the Lord needed her to do.  It is said that some are called while some are chosen.  It is even said that some were called while others went.  Ms. Amica Liburd had a calling and she responded in the affirmative to that calling.  She responded by resigning her post as an Air Traffic Controller and enrolling at the United Theological College in Jamaica to pursue a course of study. She commenced her studies in 2007 and completed her Bachelor’s degree in Theology and a Master’s degree in Divinity Studies,” Mrs. Brandy-Williams explained.
Prior to her endeavours in the world of work, Reverend Liburd graduated from the Gingerland Secondary School in 2000 and enrolled at the Nevis Sixth Form College where she studied for two years.