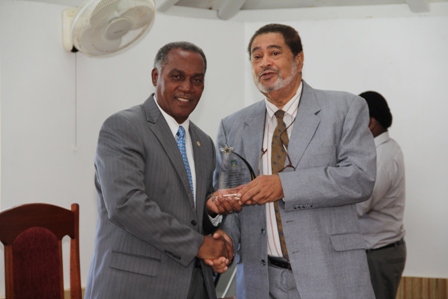 Premier of Nevis Hon. Vance Amory receiving a plaque from Deputy Governor General His Honour Eustace John from the Nevis Island Assembly as one of the longest serving parliamentarian at a special sitting of the Assembly on December 10, 2013 at the at its Chambers in Hamilton House
NIA CHARLESTOWN NEVIS (DECEMBER 11, 2013) – Premier of Nevis Hon. Vance Amory and Leader of the Opposition Hon. Joseph Parry were recognized as two of the longest serving parliamentarians on Nevis by the Nevis Island Assembly at a special sitting on December 10, 2013, when a number of persons who had served the Assembly in one way or the other at the Assembly’s Chambers, Hamilton House.
The Nevis Island Assembly, as part of its 30th anniversary, recognized to past parliamentarians, presidents and clerks of the House for the first time since its inception on Nevis.  Both Mr. Amory and Mr. Parry were awarded with plaques, like the other awardees, in recognition and appreciation for their service and dedication to the Assembly.
During remarks at the special sitting, Mr. Amory regarded the initiative as a significant step in Nevisian history.
“I think it is very memorable initiative and it is indicative of your interest, not only in the island of Nevis itself but also in its institutions and this institution is perhaps, the most or at least one of the most important institutions, in our country…It was a very significant step in the political, social and economic history of the island of Nevis and our people.
“The significance of this Assembly cannot be overstated. Its establishment and the work which it was established to do, has to be considered a watershed period in the history and times of the people of Nevis and the people of the Federation of St. Kitts and Nevis as well. It was a historic and memorable day on which the people of Nevis again felt that pride and that control of their destiny,” he said. 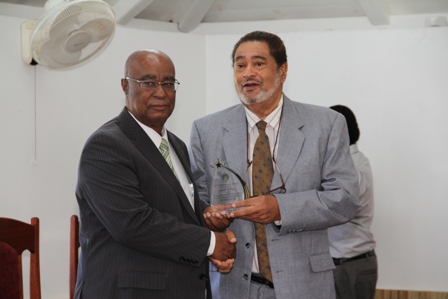 Meantime, Mr. Parry in remarks encouraged the younger generation of Nevisians to understand and admire the efforts and contributions of parliamentarians past.
“Today as we are gathered here we’re hoping, not only those 30 persons who are being honoured today would understand what they have achieved but that others, young men, young women, may also appreciate what was achieved and how it was done.
“It was not easy. It was with sacrifice and while I am hoping that people would aspire to be parliamentarians, ministers of government and political leaders on Nevis, may they understand it is not for self glorification, it is not for vein reason. It is because you want to serve, serve your fellow man and serve the people of Nevis,” he said.
The special sitting of the Nevis Island Assembly concluded with Premier of Nevis Vance Amory and Leader of the Opposition Honourable Joseph Parry being awarded with a plaque by the Deputy Governor General His Honour, Eustace John from the Nevis Island Assembly.