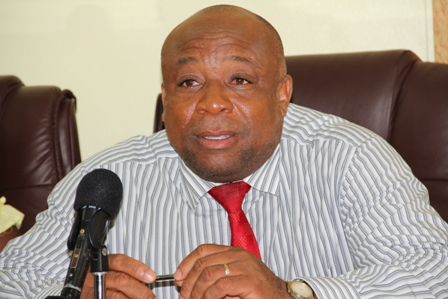 Mr. Daniel’s comment came while he delivered an address on NTV Channel 8 on December 01.

“The recent data suggest that there were two new cases of HIV in Nevis in 2011. This is worrying.

“The cost of anti-retroviral drugs and the cost of other medications to prevent opportunistic infections along with loss of productivity represent a heavy drain on the financial resources of the country,” he said.

The Health Minister noted he was persuaded that children, young people and adults were knowledgeable about HIV/AIDS but the challenge was to connect the knowledge with their behaviour.

He said it was very important that persons remained cognisant of HIV/AIDS in their daily activities and that the perception that all persons were positive until proven guilty should be assumed.

Speaking to this year’s theme “Getting to Zero”, Mr. Daniel said it was essential that everyone worked toward zero new infections, zero discrimination and zero prevalence citing that it would also fall under the parameter of the long term theme “It takes a village to fight HIV/AIDS”.

“We can therefore enlist the help of children, parents, teachers and church leaders to band together and promote abstinence, behaviour change and good communication. This ABC approach is healthy in that it puts abstinence as an option,” he said.

According to Mr. Daniel, it was important to reiterate that children under 16 continue to abstain from sex which was supported by legislation which stipulated that the age of consent for sex was 16.

However, he said strong cultural norms such as multi-sexual partners continued to drive the epidemic.

“We have come to the realisation that the days of the macho man are over. As Dr. Allyson Leacock, Chairman of the World AIDS Day Campaign in the Caribbean notes ‘This multi-partner syndrome that we continue to glorify and recognise is almost suicidal behaviour. We need to value ourselves and our loved ones enough to love, protect and respect having safer sexual practices’”, he said.

Regarding the move toward zero discrimination, Mr. Daniel said persons must be reminded that stigma and discrimination continued to mar efforts geared toward prevention, treatment, care and support.

He explained that stigma and discrimination thwarted efforts which dealt with the acceptance of people who lived with HIV/AIDS and as a people had to move to a point where everyone felt free to disclose their HIV/AIDS status.

Mr. Daniel argued that efforts needed to be ramped up not only for World AIDS Day but year round.

“Our efforts to address this must be redoubled and it is not something that is the responsibility of governments alone but as individuals, living and working in the Caribbean. It begins with us all,” he said.

In conclusion, the Health Minister further called on all to pay greater attention to their Judeo Christian heritage which called for persons to show compassion and make efforts to share and care.

“Persons living with HIV/AIDS are in need of or compassion, our tolerance, our love, our care and our support,” he urged.

Mr. Daniel explained the Ministry of Health’s Mother to Child Transmission Programme, had resulted in a reduced need for a programme for orphans and vulnerable children which they were thankful for.

He called on the Lord to provide strength and courage to continue the fight against HIV/AIDS and for increased work in prevention, treatment, care and support.