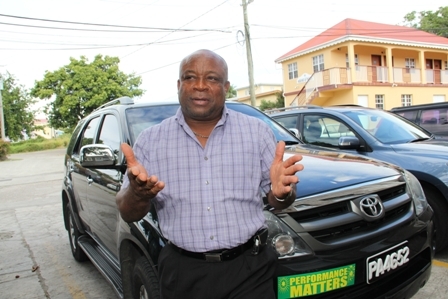 Minister of Health and Deputy Premier on Nevis Hon. Hensley Daniel
CHARLESTOWN NEVIS (January 23, 2012) — Men on Nevis were commended for their overwhelming turn out for free screenings for prostate cancer on January 14, 2012. The event was hosted through a partnership between the Ministry of Health on Nevis, a number of unanimous donors and Urologists Drs. Dwayne Thwaits and Brian Cohen.
Minister of Health in the Nevis Island Administration (NIA) Hon. Hensley Daniel told the Department of Information the marked increase in the number of men who had showed up in the prostate screening exercise denoted that they were prepared to take early action to reduce any possible difficulties they have as it related to health care in particular the prostate.

“Given the fact that we have had 24 new cases of cancer in 2010 and 14 new cases in 2011, it is absolutely important for people to take the simple route in line with the old adage that prevention is better than cure. So if we know early they can detect early then we will be on the path to early recovery,’ he said.

“Certainly it would hurt all of us if several of our men are sidelined as a result of prostate problems unknowing to themselves. So in a way it is an investment of the wellbeing of the country,” he said.

Mr. Daniel noted that the NIA had paved the way for the exercise to be free of cost.

“What we have done is to make it free. One of the concepts underlying our health programme is to make healthy choices easy choices by making this an easy choice. It means that you have provided access to a wide range of people,” he said.

The Minister said when one considered the many men who attended the screening clinic it was an indication that the NIA’s establishment of a Men’s Clinic was a step in the right direction. Also, that their efforts toward the establishment of a Urology Centre was on track.

“The Urology Centre is the next step where people can do their screenings and be treated should there be any difficulty. So I would like to commend all the men for responding and for taking your health into your own hands and for ensuring that we have a stable environment in which we can work.

“I want to thank all the doctors and the nurses and all those persons who have been involved in facilitating this early screening… as the Minister of Health I want to record my deepest appreciation and gratitude to all of you for your efforts and we look forward to continued engagement with the Urologists to ensure that we deal with the question of prostate trouble,” he said.

The Health Minister also added that the men’s response over a four hour period was remarkable given that Nevis was a small society.

Mr. Daniel also pointed out that the women on Nevis had not been left out since the NIA had already in place at the Alexandra Hospital a Colposcope machine which enabled the detection of cervical cancer.