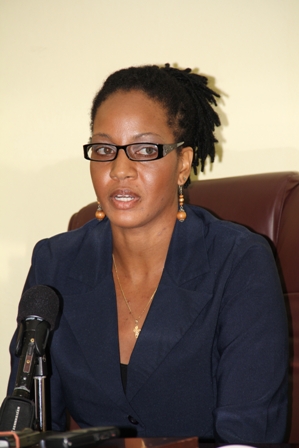 NIA/MUA Health Science Scholarship awardee Ms. Kamara Louisy who will study Veterinary Medicine at the St. Matthews University School of Veterinary Medicine
NIA-CHARLESTOWN NEVIS (August 26, 2011) — Awardees of the Nevis Island Administration/Medical University of the Americas (NIA/MUA) Health Science Scholarships expressed gratitude for the opportunity to pursue areas of study which they had dreamed about throughout their lives.

“I have been dreaming about a career in the field of veterinary medicine since I was eight years old,” Ms. Louisy said, adding “and it’s not often you find people that have such a dream that at this stage in their life, they are doing something that would help them come to that realisation.

“It has taken me basically 10 years of fighting, of knocking, of harassment; of putting aside assumptions about what a Vet should be, what they should look like, the preconceived notions that if you are dealing with animals as a woman particularly, you cannot handle it,” she said.

A visibly emotional Louisy said she believed she had proven she was a hard worker and one who was capable of rising to the challenge because of her `physical and mental strength.

She used the opportunity to encourage those who were contemplating a career, to not be dissuaded by naysayers but instead they should use her example of perseverance which eventually bore fruit.

Ms. Louisy explained that over the past 10 years, there had been times when she was discouraged and shifted her attention to other areas but somehow her heart always led her back to a career as a Vet she had longed for.

“Every time I try something else my heart always stays with vet it has never moved so I have always been satisfied with anything else that you would call a backup plan. Now I have been given this opportunity to continue because I had started previously, to continue to do what my heart has drawn me to and in essence make a contribution to the society.

She said at present there was much invested n the care and protection of animals and persons had began to care for their pets as family members and therefore there was the need for others like her to come forward to help in the diversification of the health field on Nevis not only for human beings but also animals.

Meantime, Ms. Pemberton said when she learnt that she was one of the two recipients of the Scholarship she was overjoyed and heart warmed that she was given the opportunity to realise her dream, use her God given ability to become a doctor. 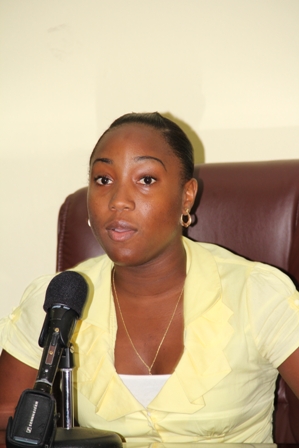 While she thanked the NIA, the MUA and the selection Committee, Ms. Pemberton underscored the significance of the scholarship.

“We know that university is very expensive especially in the medical field and this scholarship will really take me far, help me to begin my journey and to finish my journey of becoming a doctor because finding money for medical school, would not have been easy. Thanks to the Nevis Island Administration and the Medical University of the Americas, I have a big head start to begin my journey,” she said.

The scholarship awardee also thanked her family who she said always helped her along during her previous years at school and publicly thanked her parents Mr. and Mrs. Alexia and Alsted Pemberton.

“They have always been a tower of strength and to all my other family members I say thanks to you all. They have always pushed me to do my best and they have always encouraged me and to know that I have a co recipient such as Kamara I can look at her, she can be a role model for me and I can ask for advice at any time,” she said.

In conclusion, Ms. Pemberton who had worked with the Ministry of Health for the past year said she had learnt much during her stint there and that she looked forward to her return at the end of her course of study to continue to work with the Ministry as a doctor to enhance health care in Nevis.