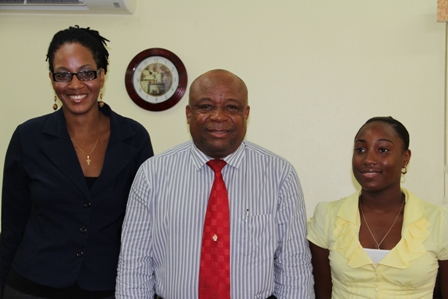 Mr. Daniel made the call on Monday, at a ceremony to announce the winners of the NIA/Medical University of the Americas Health Science Scholarship.

“Our country needs several of these persons and we invite the contribution of several other institutions not just the Medical University but we believe there are several other entities in Nevis, generating enough excess revenue or profit which can facilitate the education of our young people. I hope this example by MUA sends the positive message to other institutions, private entities, Non Governmental Organisations that we need to help to educate our people.

“I think the Government has set the tone. We have led by making scholarships available to over 180 students, so I think now we could partner with other institutions and I am making the call for that,” he said.

According to Mr. Daniel, the NIA had come to the realisation that real development included people and like the South Eastern Asian countries, whose focus was centered on people development because they had no natural resources, the NIA had taken the same approach.

“Our approach must be to develop the people and give them the opportunity to improve themselves… We believe that if we educate our people, we have done the most important thing for them. We believe that the business of education must be continuous,” he said while he urged the island’s youths to stay in school, pursue their education and to work hard and to conduct themselves in a decent and orderly manner.

Mr. Daniel made note that the Ministry of Health was pleased with the partnership forged with the MUA for the Health Science scholarships and spoke of the importance of study in the area of health.

“This is an important move for us. Those of us who remember Nevis 30 years ago Nevis used to have either one doctor or no doctor and as I speak to you, we have about 13 or so doctors on Nevis. In the next five years, we are going to have something in the region of 10 doctors who are Nevisians, when we count all the people who are abroad studying. So in time, we will have the full complement of doctors and specialists that we would want to have,” he said.

The Minister also made the point that the NIA’s approach had been to marry human resources with technology and had continued to develop the people and at the same time improve the technology.

He was hopeful that in time the partnership with the MUA would offer a greater amount of annual scholarships due to the interest in the medical field.

“I also believe that in time the University will offer more scholarships because if we had seven applicants it means that we have five more persons who are still waiting and I have been approached by one other applicant to pursue medicine,” he said.
However, he did not end before a word of advice to the recipients Ms.  Kamala Louisy and Ms. Earline Pemberton.

“To the recipients to whom much is given much is expected. The entire island awaits your success. Please know that you have the full support of the Government. Your families and the Government and People of Nevis look forward in anticipation for your success…

“The opportunity to study Earline and Kamala, is the greatest thing and you will find that you will be amazed at the number of things that your head can hold as you go forward and take the challenge. Please know you have the full support of your Government with you and we wish you every success,” he said.