(L-R) Master Austin Bart and his Mother Ms. Shana Phillip’s along with Master Keijarie Huggins and his Mother Ms. Predencia Huggins share a happy moment with the gift of school supplies presented to the students by the Department of Social Services Single Parent Support Group
NIA-CHARLESTOWN NEVIS (August 25, 2011) — Two students one each from the Joycelyn Primary School and the Charlestown Primary School were recipients of gift baskets filled with school supplies on Wednesday, two weeks ahead of the scheduled reopening of school on Nevis.

Coordinator of the Single Parent Support Group Mrs Grace Manners, in opening remarks explained that the Group was an initiative of the Social Services Department. She also gave the reason behind the awards to the students as she congratulated them.

“Annually this group through its fund raising efforts gives awards to two deserving students from two primary schools. The students are chosen by the school and the criteria used for choosing these students is as follows: The child must be from a single parent household; the student must be trying hard and their performance must be improving steadily not necessarily the top student.

“This year our two students are Keijarie Huggins of the Joycelyn Liburd Primary School and Austin Bart of the Charlestown Primary School. They are here today with their parents to receive their award and on behalf of the Single Parent Support Group and the Social Services Department, I am wishing the students great joy for what they are about to receive and continued success when they return to school,” she said. 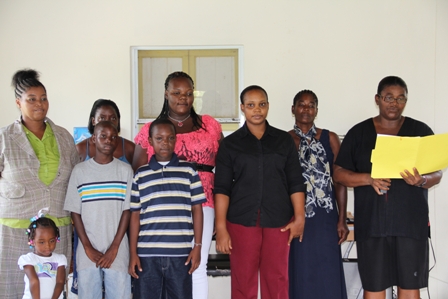 In response to the awards, both parents thanked the Single Parent Support Group for the gifts which were presented by Group Members Ms. Robehna Wilkinson, Ms. Vanessa Taveras and Ms. Ermine Whyte.

In conclusion, Ms. Wilkinson thanked the parents for participating in the handing over ceremony and encouraged the awardees to continue to excel at school and to stay away from gangs.

“Of late we realise young boys especially are getting themselves in problems and gangs but I hope that you will excel in school, keep your eyes on your goals, stick to being educated that you may come out and encourage other guys in the community to keep away from gangs and to be educated so that they in turn can give back to the community.

“I would also like to encourage the single parents to come to our workshop every third Monday right here at Grove Park Range at the Social Services office at 4:30pm. Later down this year we will also be having our annual workshop and I would also like to encourage not just moms alone but dads as well to come to support us because we also need the support of fathers,” she said.

The Single Parent Support Group is comprised of a team of women who banded themselves together to work for the development of single parents and children.

They work towards the welfare and advancement of persons in the Group in the hope that they could, in turn, enhance the lives and motivate other single parents in the community.

During their meetings held every third Monday, they discuss issues which relate to their role as single parents, engage in cooking classes, organise educational sessions for single parents and organise fund raising activities. They are also involved in skills training, educational talks and make contributions to institutions and give awards to deserving students.